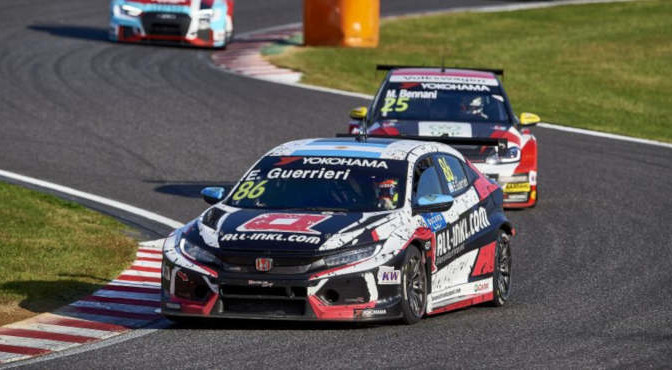 The ALL-INKL.COM Münnich Motorsport driver started sixth in his Honda Civic Type R TCR, but launched himself up to fourth as the lights went out at the start and held on to finish the 11-lap race there too.

It was the eighth time this season in which the Argentinian has finished in the top five and moved him up to fifth in the Drivers’ Championship with five races – including Sunday’s double-header – to go.

Team-mate Timo Scheider climbed from 24th on the grid to 19th by the finish of a race that was twice interrupted by the safety car; the German pulling off several impressive passing moves on what is only his third weekend racing front-wheel-drive machinery.

Yann Ehrlacher endured a luckless race. Having been shoved into the gravel by another car – which had cut the chicane at the end of the opening lap – he suffered contact from two further rivals; the second incident putting him into the gravel at 130R and out of the race.

Twenty-four hours after he was warmly welcomed back onto the WTCR grid following 14 months recovering from injury, Tiago Monteiro ended his first race in the series in 15th place; two spots higher than where he started.

The Suzuka weekend concludes with a pair of races on Sunday.

Esteban Guerrieri 86
“After starting sixth, I’m pleased to finish forth. I took new tyres for this race because my grid position was better than for either of the races tomorrow, and it paid off because I was able to make up some positions on the first lap. From there it was a case of keeping my nose clean and waiting for something to happen in front of me. It didn’t and I wasn’t able to make up any more places. I think also we misjudged the tyre pressures slightly, so I wasn’t able to extract maximum performance from the car. It will be tougher tomorrow, so I think we maximised the potential today.”

Timo Scheider 42
“I had a clean race, which is a nice change compared to the Chinese events. I went from 25th on the first lap to 19th at the finish, which was three overtakes on-track and a couple of cars going off or having penalties. The way the BoP is at the moment, it’s not easy for us on straightline speed, so you have to make up all your time in the corners because of what you lose on the straights, and that makes this circuit tough on tyres. It’s a solid result though and I’ve continued to learn front-wheel-drive racing. I’m starting higher up tomorrow, so let’s see what happens.”

Yann Ehrlacher 68
“That was a hugely frustrating race. I started on old tyres so I could keep my new rubber for my second-row start tomorrow, and lost a place on the first lap. Then [Frederic] Vervisch cut the chicane completely and pushed me straight off into the gravel on the exit. It’s not the first time he’s done that kind of thing and it cost me more time and damaged my tyres. Then I lost six places with contact from another car and eventually my race ended after the first safety-car period when I had more contact from behind. If we can improve the set-up for tomorrow, we can do well from fourth on the grid.”

Tiago Monteiro 18
“It’s 468 days since I did my last race in the WTCC in Argentina last year, but when I was on the warm-up lap heating my tyres, I swear it felt like only two weeks ago. It was the same when the race started. Everything just felt extremely normal and natural, and on reflection, that’s a very strong feeling. It was a fun race. I had some battles, made up some positions and finished ahead of where I started. Tomorrow I start both races further up than today and we’ve done some good work to improve the car since the first session since yesterday, so I know I’m going to have more fun.”

Tom Coronel 9
“I had a pretty reasonable race and the pace was especially good for the first half of the race. I had a front-row seat when Yann Ehrlacher and Gordon Shedden made contact and I was able to take advantage. I had a great battle with Shedden over the last couple of laps and eventually overtook him to finish 17th – ahead of the guy who won the race two weeks ago. I think today proves that we need to improve our performances in qualifying, because it’s clear we can run a faster race pace than many of the cars we started behind.”

Dominik Greiner
Team Manager
“Esteban had a very good finish in fourth place, which moves him up to fifth in the championship – his highest position for quite a while – and the race pace for Timo today was also quite encouraging. It’s a shame for Yann that he had some pretty terrible luck. There is definitely some pace to find with set-up adjustments for tomorrow’s races, and we’ll aim to finish as high as we possibly can with all three cars.”

Olivia Boutsen
Team Manager
“It’s been such a strong comeback for Tiago today in what is a championship that is becoming more closely-fought every time we come to a new weekend. Of course he knows the team and the car and he’s happy with both, but having him back as a driver has spread a lot of good energy in the garage and I think that’s been good for all of us. The pace shown by Tom was also a positive today and both drivers were able to move forwards and finish without even a scratch on their cars. To see how Tom is absolutely beloved here is very nice and. He’s fantastic with his fans and I think we’re maybe the most popular team here because of it.”