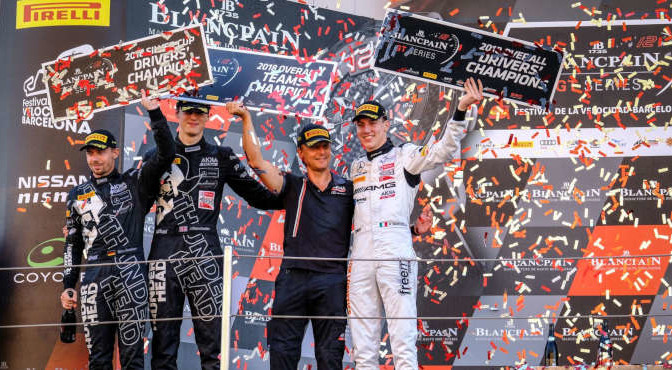 Jerome Policand’s squad ended the year by taking the biggest prizes of all: the overall teams’ title, and the drivers’ crown courtesy of Italian ace Raffaele Marciello.

AKKA ASP also clinched the Sprint Cup drivers’ championship, a brace of Silver Cup titles, and race wins in the Am Cup. Pending an appeal by the disqualified Black Falcon entry, AKKA ASP might yet add two Endurance Cup titles to that haul.

It is the culmination of several years’ hard work: the team began life in the Pro-Am ranks, gradually becoming a contender for outright victories.

Though a relatively recent arrival at the very top of international GT racing, the team has been competing and winning across Europe for almost 20 years. Established by long-time racer Policand as Auto Sport Promotion – usually shortened to ASP – the French squad has developed a small crew known for its racer’s spirit and total commitment to the cause.

In that respect, it is a team modelled after its founder.

Life behind the wheel

Policand’s life as a racer began when he was just six. His elder brother was a Jackie Stewart fan and Jerome started following Formula 1 on TV. Soon enough he was travelling to grands prix across Europe to watch his heroes.

The story thereafter is a familiar one: Policand began competing in go-karts, then entered a racing school to earn a move to single-seaters. He won a scholarship to race in Formula Ford and continued climbing the ladder.

“It was a very good system,” says Policand, acknowledging the changed landscape that young drivers face today. “You knew you had a chance, with very little money, to get quite a big budget and start in racing.”

His ultimate goal was Formula 1 and Policand came close, moving through French Formula 3 and eventually International Formula 3000, the main F1 feeder series at the time.

“But you know the story: I spent my time with borrowed money, trying to find sponsors.”

Along the way Policand went up against the best French talent of his generation: Eric Helary and Olivier Panis were F3 rivals, while Yvan Muller was a teammate in F3000. A few emerging international stars caught his eye, too.

“I drove against Schumacher and Hakkinen and they were in another league,” he recalls. “You could see that these guys were special.”

Reaching his late twenties, Policand switched to international GT and prototype racing, including stints in the U.S. and Asia and several starts at Le Mans.

Though he never quite reached F1, the Frenchman has “no regrets. I loved my life as a racing driver.”

But, in truth, he has not fully left it behind.

“Sometimes I miss it, but only during the winter. When I am at the track and I have to take care of the drivers, the mechanics and the engineers, I don’t miss it. But you miss the adrenaline of motor racing and the feeling of driving the car.

“For sure I will come back at some point,” he confirms.

From cockpit to pit wall

Policand established Auto Sport Promotion to support his own career and was quickly able to achieve on-track success. Nevertheless, he sees AKKA ASP’s recent triumphs in the Blancpain GT Series as the result of a long learning process.

“In the beginning I set the team up around me to do the Renault Clio V6 Trophy,” he explains. Policand won that title in 1999 and was given a budget to field another driver the following year, which began to shift his approach.

“At the very beginning I was running the team like a racing driver. This was the wrong way to do it, even if we got results.

“I thought I would buy a trailer, put the car in it, buy tools and then go racing. Forget it! It’s easy to buy things, but it’s not easy to organise.”

Today, Policand sees the organisation of people as one of his key responsibilities. Finding employees who match his team’s ethos is especially important.

“They must have the right spirit and motivation,” he explains. “If you have the motivation, you have done 50 percent of the work.

“Most of the people in my team began as students. My old chief engineer is now the team manager; my first mechanic is now the chief mechanic. They are all people who have worked with me and understand the spirit of the team.

“Young people today are very hard-working. Usually the old people say that young people are lazy, but not at all – at least not the people who stay with me!”

For a typical Endurance Cup race, 28 people run five cars; when fielding five Sprint Cup cars in Hungary, it was just 20 people. The obvious exception is the Total 24 Hours of Spa, where AKKA ASP’s crew of 40 people ran four cars.

Policand prefers it this way, believing that bigger does not necessarily mean better.

That a crew of just 28 people can field a fleet of five GT3 cars in the ultra-competitive Endurance Cup is hugely impressive. Indeed, Formula 1 team bosses may be wise to study Policand’s efficiency techniques!

This year has been more than Policand and his team could have hoped for, culminating in multiple titles and a reputation for metronomic consistency.

“To be honest, I never expected this!” says Policand “My goal was to be on the overall podium, because I thought we were not yet completely ready.

“To win a championship, you need to have a different perspective,” he explains. “Sometimes you need to sacrifice a place and make sure you take the points. It’s very difficult because we are all fighters. The drivers are all quick and they want to win, but there are so many cars on the track and it is easy to get a penalty. You have to always concentrate, keep calm and do your job. I am proud that we did that.”

There is particular praise for Marciello, whose raw speed and race craft in the #88 Mercedes-AMG have been vital to AKKA ASP’s rise. Policand has worked with and competed against many talented drivers over the years, and it is clear from his enthusiasm that he rates the Italian very highly.

“Lello helps a lot by giving us confidence,” he says. “For sure he is special. GT racing is very strong now, so I don’t see it as a waste, but this guy should have had his chance in Formula 1. He jumps in the car and is quick out of the box in everything.”

The support of naming sponsor AKKA Technologies has also been a crucial part of the team’s recent success. Indeed, it goes beyond simply placing logos on the cars.

“AKKA is an engineering company, so we have a connection with a few departments to help the team,” Policand explains. “Next year I think we will have one or maybe two full-time engineers from AKKA with us. For them it’s not just a sponsorship deal: they want to prove that AKKA can have a big effect on the race team.

“We started together in 2015 and it’s growing. We’re working together more closely on the engineering side and it’s getting better and better. It’s a very good relationship.”

As a driver, Policand dreamt of Formula 1. But, for his team, the future is clearly in GT racing. Among his next tasks will be to remain on top in the Blancpain GT Series and conquer the Total 24 Hours of Spa.

“Every time I go to a track, I know I have a chance to win. In Formula 1, most teams are aiming to be best of the rest. That’s a strange feeling. For me, at this stage, the only possibility is GT3.

“I have to keep the team focussed and win again. That is the next challenge,” he says.

“The day I lose a bit of motivation I am sure I will stop, but I don’t think I will lose motivation for motor racing. It is my life, so I cannot see myself stopping.”

It is this unshakable passion for the sport that has made AKKA ASP so formidable. Indeed, there are echoes of the six-year-old, sitting with his elder brother watching Jackie Stewart, in Policand’s enthusiasm.

It filters through to every level of his team: speaking after clinching the overall title, Marciello explained how happy he was to work with a real racer like Jerome. In doing so, the champion summed up a feeling that extends throughout the whole AKKA ASP crew.

As Jerome puts it: “If you have the motivation, you have done 50 percent of the work.” But, given his passion for the sport, you get the feeling that it is not work to him at all.