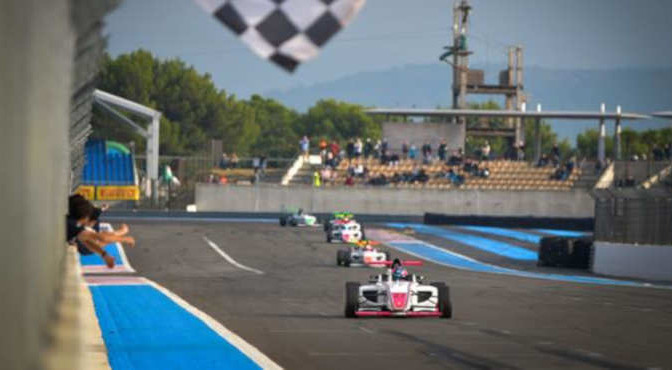 On the Paul Ricard circuit, the very last FFSA Academy race of 2018 was eagerly anticipated by all the drivers, eager to finish their year in style and get the best possible classification in the French F4 Championship. By winning once again, Ugo De Wilde was undoubtedly the star of the meeting. The Belgian took the opportunity to win the Vice Championship behind the Brazilian Caio Collet who was already crowned.

The 2018 FIA F4 French Championship ended under the sun of southern France at Le Castellet, with magnificent duels to climb on to the last podium of the season. The seven meetings have highlighted a very cosmopolitan scene and an exceptional vintage, which already augurs well for splendid 2019 sporting season. More than ever, the FFSA Academy has played its role in the discovery and development of talent, both in the FIA Championship and in the Junior Championship.

To the delight of Ugo De Wilde, the scenario of Saturday’s Race 1 was repeated on Sunday. Concentrating and determined, he made an ideal start from pole position, quickly dropping his opponents by a few lengths. After a magnificent lone race, he won to definitively secure 2nd place in the French Championship, coveted by several drivers.

Behind De Wilde, many of the drivers took part in majestic duels. It was particularly intense between Théo Pourchaire and Adam Eteki, as well as between Caio Collet, Ulysse De Pauw and Théo Nouet. After several exchanges of positions, Eteki took 2nd place against Pourchaire, which did not prevent him from finishing as the 3rd best driver of the season of the FFSA Academy, in addition to his title of French F4 Junior Champion.

A few tenths behind, Theo Nouet ended his season very positively by going for 4th place after a strong attack and very fast lap times. De Pauw was in 5th position in front of Collet, who was driving with a lot less pressure since he took the French Championship in the previous race. 7th and 2nd best Junior of 2018, Reshad De Gerus confirmed his progress among the main protagonists of the season.

The new generation is already at the sharp end

Pierre-Louis Chovet regretted his distant starting position, because his fastest lap in the race could have allowed him to finish much higher up than 8th. In the fight for a place of honour in the chasing pack, Alessandro Ghiretti dropped down following a penalty. However, he had the opportunity to make his presence felt after joining the French F4 squad at the end of the season.

This Paul Ricard event was also marked by the debuts of young Evan Spenle and Gillian Henrion. Both have come a long way. Spenle completed a Race 3 full of promise, while Henrion put himself in the spotlight by successively qualifying 6th and 7th, before being ranked 9th in Race 3 ahead of Esteban Muth. Romain Boeckler, Arthur Leclerc, Baptiste Moulin and Shihab Al Habsi who were not far from the top 10 at Le Castellet.