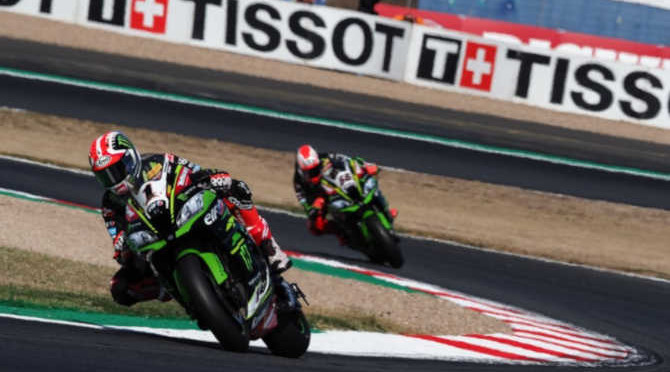 With two rounds remaining on the MOTUL FIM Superbike World Championship calendar, Kawasaki have secured the manufacturers world title for the fourth year in a row following another season of stunning domination. Finishing first or second in all but two races of 2018, their title defense was never at risk.

Seven riders have been on track scoring points for the Japanese manufacturer, with 520 points accumulated throughout the season, beating their closest rival Ducati by 92. Despite facing challenges with the new regulations for 2018, riders taming the ZX-10RR beast have impressed in great scathes and the factory outfit of Kawasaki Racing Team WorldSBK have once again reigning supreme. But it’s not only KRT who have secured a podium for the green conglomerate, with Toprak Razgatlioglu (Kawasaki Puccetti Racing) taking his debut podium finish at Donington Park.

Entering the debut WorldSBK race back in 1988, Kawasaki have been regular podium finishers in the 1990’s and early 2000’s, but were never able to secure the manufacturers crown until the unstoppable duo of Tom Sykes and Jonathan Rea came along. Taking 376 podiums, 125 victories, 120 fastest laps and 80 pole positions overall, Kawasaki are truly making their mark in the WorldSBK history books. With their first victory coming around the Hungaroring in 1988 from France’s Adrian Morillas, the 1990’s welcomed a successful run with Scott Russell. However, their recent surge of results came after signing Tom Sykes in 2012, and from there the success has not stopped.

Another British rider added to their successes, as Jonathan Rea joined the factory in 2015 and has smashed records along the way. Sykes shot them back into success, but Rea was able to add to their tallies, and the combination of the British duo has proven to be a strong one. Helping to take Kawasaki to the top of the manufacturers standings in 2015, 2016 and 2017 – alongside others – they have been Ninjas on their ninjas.

Aiming to top what was a stunning 2017 has proven difficult, but the green machines have been making a good effort at doing so. Fans have seen the ZX-10RR’s on the podium 29 times, with 16 wins and seven pole positions – and there are still two rounds remaining! Alongside some stunning performances from Sykes and Rea, Razgatlioglu has begun to emerge as a new talent following his podium finish, and the wins just keep on coming for the KRT riders.

Overtaking Honda in the all-time win records this season, they firmly have Honda in their sights as they look to overtake their all-time podiums record, as well as equal their world titles at the end of this season. With two rounds left and 100 points on the table, can they end the season on even more of a high? And will anyone bring the fight to the green machines next year?