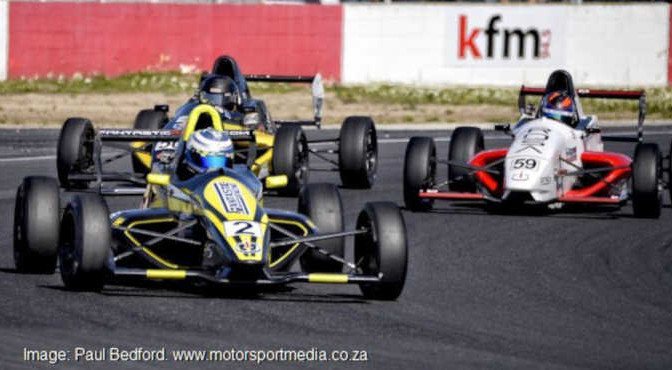 The Investchem Formula 1600 championship is still there for the taking when the Road to Indy heads to its final encounter at Pretoria’s Zwartkops Raceway Saturday 20 October. Stuart White should by all means have wrapped that prize up at Killarney last time out, were it not for a last corner slip that saw him tumble out of a championship clinching position, all of which sees Nick van Weely still in with a shout, so it’s all going down to a final face-off in Pretoria.

White (Fantastic Racing Mygale) and van Weely (Magnificent Paints & Hardware van Diemen) emerged as championship contenders after Stuart took the opening four championship rounds at Kyalami and Killarney. Nicholas struck back winning the following four races at Zwartkops and East London and the duo then shared out the wins at a sodden Aldo Scribante in Port Elizabeth to establish a strong advantage in the title race as they fought it out up front.

It was all change back at Zwartkops as Scott Temple (Road to Race Mygale) took both the round 6 wins while White moved ahead of van Weely, who struggled on his second visit to Pretoria. White then won the opening race at a blustery Killarney to all but clinch the title, but that second race slip let van Weely off the hook as Temple took his third win of the season to consolidate his championship third.

Temple however has to keep the consistent Alex Gillespie (ERP Trucking Components Mygale) in check if he wants that championship third. Also keep an eye on Andrew Schofield (Investchem Mygale), who may have the attentions of Cameron O’ Connor (Universal Health Mygale), should the youngster find a gap in US race commitments to chase for that championship fourth.

Failing that, O’Connor could well slip further behind his young gun rivals Tiago Rebelo (TRMS Mygale), Liam Pienaar (Pheonix Jewellers Fantastic Racing Mygale) or Andrew Rackstraw (Investchem/RDSA Mygale); while the three of them need to jeep an eye on their championship mirrors for Siyabonga Mankonkwana (Cervinia Investments/Max Q Mygale) and Joshua Dolinschek (Makita Mygale) in a midfield spat made all the more entertaining considering Rebelo, Rackstraw and Dolinschek all scored their first F1600 podiums over the previous two meetings

The Class B struggle is an interesting one as David Jermy (Beauty Factory Mygale) leads Ian Schofield (Investchem Mygale) in the overall championship, but Schofield somehow finds himself ahead of Jermy in the class title race and they can be expected to continue their spat right down to the line amidst a scrap that often includes Brendan Tracey (Investchem Mygale), Gerard Geldenhuys (Abacus Divisions Mygale) and Allen Meyer (van Diemen), while newcomer Zac Edwards makes his Investchem Formula 1600 debut this weekend.

So the Investchem Formula 1600 championship and that Road to Indy prize is all to play for at Zwartkops Saturday 20 October — another very good reason to get down there to witness it go down first hand!