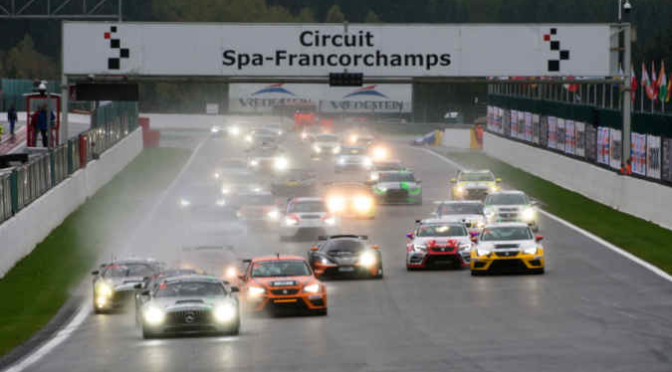 After last year’s successful inaugural edition, the CREVENTIC SERIES powered by Hankook are returning to the world-famous Spa-Francorchamps circuit. Last year’s race was for touring cars only, but this time, GTs will be on track as well as the European championship season for the 24H GT SERIES and the 24H TCE SERIES will come to an end in the Belgian Ardennes. That is setting the stage for a real showdown in the battle for the various titles. Excitement is therefore guaranteed!

At more than seven kilometres, the Spa-Francorchamps circuit is the longest on the calendar of the CREVENTIC SERIES powered by Hankook. With plenty of undulation and high-speed sections, the track in the Belgian Ardennes ranks among the favourites of most drivers. A week prior to the event, 27 cars have been entered for the GT division and 36 cars for the TCE segment, including no less than 19 TCR cars, a clear proof of the ongoing success of the touring car format. The Hankook 12H SPA will have two separate starting groups, one for the GT cars and one for the touring cars. Accordingly, each division will also have its own pole position.

German team PROsport Performance will be coming to Belgium as the leaders in the overall European Championship standings of the 24H GT SERIES powered by Hankook, but Car Collection Motorsport and Bohemia Energy Racing with Scuderia Praha are following closely, five and seven points down respectively. Four teams each are still battling for A6 and 991 class honours while in the SPX and GT4 classes, two Belgian teams are on the verge of winning the titles with Speedlover and QSR Racing School respectively. In the TCE division, Hofor Racing powered by Bonk Motorsport has already wrapped up the overall title, but a tight battle for runner-up position is expected with the Red Camel-Jordans.nl and NKPP Racing by Bas Koeten Racing teams only two points apart. Here, competition for the various class titles will also be decided at Spa-Francorchamps. All the champions will be honoured during CREVENTIC’s second ‘Night of the Champions’ in the paddock of the Spa-Francorchamps circuit on Saturday evening.

The A6 class spearheads the GT division with 6 Mercedes-AMG GT3 up against one Porsche 911 GT3 R, one Ferrari 488 GT3 and three Audi R8 LMS GT3s. The SPX class includes three MARC silhouette cars and three Porsches as well as a pair of KTM X-Bows. Four Porsches have been entered for the 991 class and four cars, two BMWs and one Mercedes and one Audi will be competing in the GT4 class. A record entry of 19 cars is expected for the TCR class as the leading TCE category with nine Cupras/SEATs, six Audis and four Volkswagens. The SP3 class includes three BMWs, one Ginetta and one Aston Martin. The A3 class field consists of two BMWs and two Hondas as well as one SEAT and one Peugeot. Six BMW M235i Racing Cup cars in the CUP1 class round out the field. Eight Belgian teams with a total of ten cars in the field are likely to generate national interest as well.

All in the family

An interesting fact is the participation of many family teams in the Hankook 12H SPA. MDC Sports is running a Mercedes-AMG GT3 for Manuel, Adrian and Philipp Zumstein. Van Berlo Racing has entered a Porsche 911 Cup in the 991 Cup class for father Marcel van Berlo and his sons Kay and Glenn. Hakan and Recep Sari are racing the Gamsiz Motorsport BMW M4 GT4 while father and son Ivo and Rik Breukers are alternating behind the wheel of the Red Camel-Jordans.nl SEAT TCR car. And next to the full family teams, there are various other teams with family connections, including the recently married couple of Chantal and Alexander Prinz and Chantal’s father Michael Kroll at Hofor Racing, father and son Henk and Daniël de Jong at MP Motorsport, the Demorges at Porsche Lorient Racing, the Curtis at Ebimotors, the Holmgaards at Holmgaard Motorsport, the Navarros at Motorsport Development, the Chahwans at GDL Racing, the Mays at CWS and the Bellocs at TICTAP Totcar Sport. Motor racing may be an individual sport, but especially in endurance racing, it can also be a family affair!

After optional test sessions on Friday morning and afternoon, 12 October, official track action for the Hankook 12H SPA starts with free practice from 16.00-17.30 hrs, followed by qualifying for the TCE segment from 17.45-18.15 hrs and for the GT segment from 18.30-19.00 hrs. The starting grid procedure starts on Saturday, 13 October, at 9.00 hrs. The race gets underway at 9.50 hrs and finishes at 21.50 hrs, followed by the prize-giving ceremony and the ‘Night of the Champions’. CREVENTIC also plans to announce its 2019 race calendar during the weekend at Spa-Francorchamps.

Live streaming in HD quality with commentary from the Radio Show Limited team, well-known from IMSA Radio and Radio Le Mans, is available on the series’ website and Youtube channel as well as Motortrend on Demand. There will also be regular updates on Twitter, Facebook and Instagram (24H Series). Hankook is the official title sponsor and exclusive tyre supplier for the event, Panta is the official fuel supplier. The following companies will be present with sales and service booths in the paddock at Spa-Francorchamps: DRD international for pit equipment, screen protection etc., Stand21 Racewear, Speedcom for radio communication equipment and support, Aircharge, specialised in wireless mobile charging products, and Circuitvanhout that has produced the beautiful new trophies for the prize-giving ceremony. Further information can be found at www.24hseries.com.