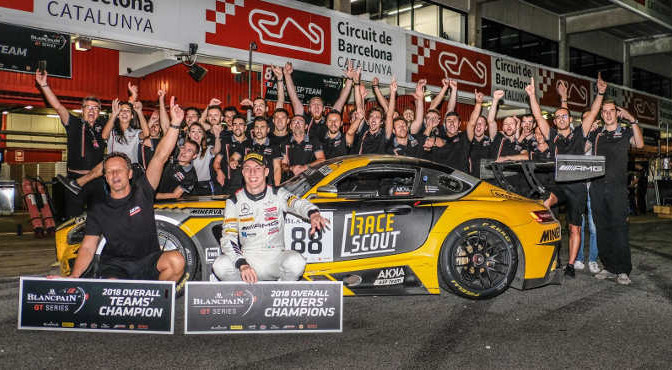 The 2018 Blancpain GT Series Endurance Cup has been ultra competitive since the green flag waved at the opening race more than five months ago. On Sunday it concluded with a typically close-fought contest at Circuit de Barcelona-Catalunya, where class and overall honours were finally decided.

The #4 Mercedes-AMG Team Black Falcon car initially triumphed on the road to seal the Endurance Cup title, but was subsequently disqualified for a regulation breach. The team has since taken up its right to appeal the decision.

This elevated the #88 Mercedes-AMG Team AKKA ASP car of Raffaele Marciello, Daniel Juncadella and Tristan Vautier into top spot for the season finale. Marciello took the Endurance Cup drivers’ title as a result, while the AKKA squad secured the teams’ championship.

However, the results of the Barcelona race – and therefore the Endurance Cup standings – will remain provisional until Black Falcon’s appeal has been heard. Should the #88 Mercedes-AMG retain the win, Marciello will become the first driver to hold all three Blancpain GT Series titles at once.

Marciello and AKKA may appear to have dominated, but 2018 has been a remarkably competitive year.

Marciello and Vautier were the only drivers to score more than one Endurance Cup podium in 2018, while of the 12 brands competing full-time, 10 finished among the top-three at least once.

Regardless of the outcome of the Mercedes-AMG Team Black Falcon appeal, Marciello has clinched the overall 2018 Blancpain GT Series drivers’ title. The AKKA ASP squad has also triumphed in the teams’ championship.

Marciello’s rise to the top is no surprise. A former European F3 champion with immense success in the junior single-seater ranks, he has quickly settled with AKKA ASP.

“I feel at home with them,” the new champion commented after the race. “Jerome [Policand] is really passionate about racing and it’s really nice to work with guys like that. Now it’s time to party, because we’ve had a great Blancpain GT Series season.”

For AKKA ASP, this represents a new level of success. Jerome Policand’s squad has raced in the Blancpain GT Series since it began in 2011, though its focus was primarily in the Pro-Am ranks.

The backing of AKKA Technologies and a move to Mercedes-AMG machinery has seen the team flourish. A maiden Sprint Cup win came in 2016 at Circuit de Barcelona-Catalunya, followed by a first Endurance Cup triumph at the same circuit in 2017. Now, AKKA ASP has multiple titles to its name.

Ahead of the finale, Strakka Racing had finished each previous Endurance Cup race in the top-four of the class and held a lead of 15 points. A repeat result for the #42 Mercedes-AMG would have comfortably secured the title, but Barcelona proved to be a tricky event and the pace of two Ferraris – the #333 Rinaldi and the #51 AF Corse – became a major concern.

At the chequered flag the crew of Nick Leventis, Chris Buncombe and Lewis Williamson took eighth, enough to secure the title by just three points. The #51 machine in particular had them sweating during the latter stages, but ultimately Strakka held on.

While Strakka took the crown, there was a breakthrough Pro-Am race win for the Daiko Lazarus squad. Fabrizio Crestani made rapid progress during the opening stint before handing over to Miguel Ramos and then Giuseppe Cipriani to complete the crew’s maiden Blancpain GT Series triumph.

“I’m pleased with my stint and I’m very, very happy with the job that Giuseppe and Miguel did today,” commented Crestani afterwards. “I’m giving everything to help them improve and when they are that good it makes me very satisfied.”

Cipriani, who brought the car home to secure victory, said: “Today was an easy task because Fabrizio and Miguel did such an amazing job. I just had to focus and concentrate on not making a mistake.

“We hope to be back next year,” he added. “I couldn’t hope for anything better than what I have with Fabrizio and Miguel, so if they will drive with me it will be my pleasure!”

The #54 Emil Frey Racing G3 Jaguar was contesting its final Blancpain GT Series race at Circuit de Barcelona-Catalunya. Built by the Emil Frey squad, it has competed since 2012 and spent this season contesting Endurance races in the Silver Cup class.

It would be difficult to write a better final act for the car. Its crew of Alex Fontana, Adrian Zaugg and Mikael Grenier took the Silver Cup win – not to mention an overall podium – to overcome a 17-point deficit and snatch the class title. The Big Cat’s farewell race was one to remember.

The #77 Barwell Motorsport Lamborghini Huracan clinched a brace of Endurance titles in perfect fashion with victory at Circuit de Barcelona-Catalunya.

It has been a fine year for the #77 machine, which scored two wins and two runner-up finishes in the Endurance Cup. Adrian Amstutz and Leo Machitski secured the drivers’ crown by 32 points, while Barwell was also comfortably clear of the competition in the teams’ standings.

Raffaele Marciello’s 1m43.667s was the fastest lap of the weekend, marking the third time in five races that the Italian was the quickest man overall. No other driver achieved this feat more than once in 2018.

The best lap by a Silver Cup competitor came from Nico Bastian (#90 AKKA-Mercedes) with a 1m44.091s. In Pro-Am, Alessandro Pier Guidi (#11 Kessel-Ferrari) was the quickest of all with a 1m44.266s, while a lap of 1m46.021s made Chris Buncombe (#42 Strakka-Mercedes) the fastest amateur in the class. In the Am Cup category, Fabien Barthez secured the best lap with an impressive 1m45.468s.

Six drivers were contesting their home event at the weekend and there was no shortage of Spanish success: Daniel Juncadella was part of the winning #88 AKKA-Mercedes, while Miguel Molina secured second in the #72 SMP-Ferrari.

All in all it was a tremendous result for the many Spanish fans in attendance over the weekend, including Soucek’s one-month-old daughter Valeria, who was cheering on her dad for the very first time.

An unfortunate absentee from the race was local favourite Lucas Ordonez, who suffered a training injury in the week prior to the event. The Spanish ace was present to support his GT Sport Motul Team RJN crewmates, with fellow gamer-turned-racer Jann Mardenborough taking his spot in the #23 Nissan GT-R Nismo.

During the weekend Ordonez and long-time teammate Alex Buncombe were honoured by Nissan for reaching 10 years with the Japanese brand. Among those present to congratulate them were Nissan’s global motorsport director, Michael Carcamo, and their team boss Bob Neville.

The Polish driver was quickly up to speed, setting the third-fastest Pro-Am time in his qualifying session, but the car managed only 21 laps before retiring from the race.

Stephane Ortelli maintained his 100 percent appearance record in the Blancpain GT Series Endurance Cup, contesting his 41st successive event. The Monegasque has been present at every single round of the championship since it was introduced as the Blancpain Endurance Series in 2011.

The evergreen Ortelli had missed the two previous Sprint Cup events following his accident at the Total 24 Hours of Spa, but was back in the #114 Emil Frey Racing Lexus for the Barcelona contest. He endured a challenging weekend, with the #114 suffering an engine failure in qualifying and retiring from the race after 57 laps.

Circuit de Barcelona-Catalunya will remain part of the Blancpain GT Series in 2019 and keeps its established date at the end of September (27-29).

Next year it will revert to a Sprint event following two seasons on the Endurance Cup schedule. It continues as the closing round of the Blancpain GT Series, meaning a number of titles will once again be decided at the Spanish venue in 2019.

While this weekend’s event marked the end of the Blancpain GT Series season, three significant dates remain on the SRO Motorsports Group calendar for 2018.

On 12-14 October the GT4 Sprint Cup Final will take place at Hockenheim, while on 26-28 October the Intercontinental GT Challenge will conclude its third season with the California 8 Hours. Finally, on 30 November-1 December, the inaugural FIA GT Nations Cup and GT4 International Cup will take place as part of the Bahrain GT Festival.

Movisport di nuovo a podio: A