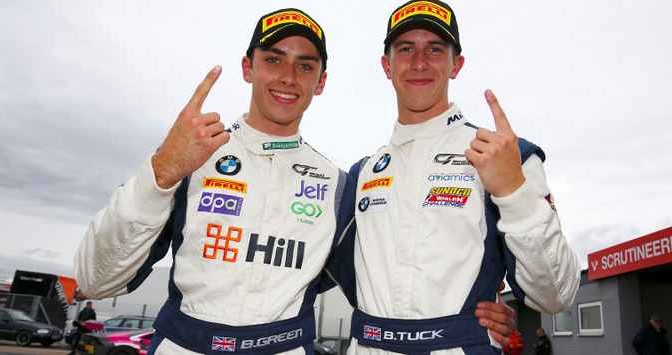 The crews lying second in this year’s British GT3 and GT4 standings will both start tomorrow’s #DoningtonDecider from their respective class pole positions after the Barwell Motorsport Lamborghini shared by Jon Minshaw and Phil Keen plus Ben Tuck and Ben Green’s Century Motorsport BMW prevailed in a damp qualifying session earlier this afternoon.

But with their championship rivals not far behind and pitstop success penalties also set to play a role, tomorrow’s two-hour British GT finale looks set to be a classic.

Title contenders Jon Minshaw and Phil Keen gave themselves the best possible chance of overturning their 27.5-point championship deficit by claiming a commanding pole position for Sunday’s race. Both drivers set the fastest times in their respective Am and Pro sessions on a damp but drying track that played perfectly to theirs and the Barwell Lamborghini’s strengths.

Minshaw initially set the tone by lapping 1.222s quicker than Graham Davidson whose late effort elevated the Jetstream Aston Martin to second ahead of Barwell’s other Huracan piloted by Sam De Haan.

Optimum’s championship leader Flick Haigh and Beechdean AMR’s Andrew Howard also made the most of the improving conditions to jump up to fourth and fifth, respectively, ahead of another title protagonist, TF Sport’s Mark Farmer, and GT3 debutant Graham Johnson in the Balfe Motorsport McLaren. Derek Johnston rounded out the top-eight in his final British GT outing before retirement.

Next up were the Pros and as conditions continued to improve so, inevitably, did the times.

Yelmer Buurman was out of the traps quickest of all en route to consecutive fastest laps, the latter of which helped the ERC Sport Mercedes-AMG he shares with Lee Mowle move from 10th to seventh in the final reckoning. However, the Dutchman’s bubble was soon burst by Barwell’s Jonny Cocker and Keen who were the only drivers able to lap in the mid-to-low 1m39s bracket. Indeed, Keen’s fastest time of the session – 1m39.292s – helped the #33 crew extend their overall pole margin to 1.609s.

Cocker’s time, which was just over a tenth slower, saw Barwell lock-out the front row ahead of Maxime Martin and his Jetstream co-driver Davidson, while AMR’s factory trio of Jonny Adam, Nicki Thiim and Marco Sorensen posted times within 0.062s of each other to claim fourth, fifth and sixth, respectively.

A thrilling GT4 qualifying session in ever-improving conditions saw the #42 Century Motorsport BMW of Ben Tuck and Ben Green net a vital pole position on a day when team-mate and championship leader Jack Mitchell – along with co-driver Dean Macdonald – could only record the seventh fastest time.

Finlay Hutchison had set the initial pace in the first part of qualifying, a 1m47.436s giving the #10 Equipe Verschuur McLaren a comfortable advantage of 0.360s over the rest of the field. Green finished second quickest while Tolman’s Michael O’Brien, who had topped the times for a large part of the session, was eight tenths slower than Hutchison in third.

Verschuur also looked well set to maintain its provisional pole position in the second session. However, a last-gasp effort from Tuck was enough to secure pole for himself and team-mate Green by a combined 0.270s. And that could prove crucial tomorrow when the pair must overturn Mitchell’s current 10-point lead while also serving a 15s pitstop success penalty for finishing runners-up in the previous round at Brands Hatch.

Daniel McKay also lines up on the front row in his and Hutchison’s #10 McLaren whilst O’Brien and Fagg, who still retain a chance of winning the crown, claimed third in their Tolman Motorsport McLaren. Meanwhile, a stellar lap from Ben Barnicoat enabled the #72 Balfe Motorsport 570S he shares with Adam Balon to claim fourth overall and Pro/Am pole.

Further back, title contenders Will Moore and Matt Nicoll-Jones combined to take fifth ahead of the sister Academy Motorsport V8 Vantage shared by Wood and Jan Jonck. Sixth fastest was the McLaren of O’Brien and Charlie Fagg with Macdonald and Mitchell only able to manage seventh in their BMW.

The top-eight was rounded out by Pro/Am points’ leaders Nick Jones and Scott Malvern in the Team Parker Mercedes-AMG, and Pointon/Patrik Matthiesen will aim to bridge their overall 13.5-point deficit from ninth on the grid tomorrow.

Live build-up to British GT’s two-hour #DoningtonDecider begins at 15:15 tomorrow before the race itself gets underway at 13:35. Watch it live on the championship’s website and Facebook page.

DRIVER QUOTES
Phil Keen, Barwell Motorsport #33 Lamborghini Huracan GT3: “It is going to be dry tomorrow so it is going to be tough but we’re in the best starting position. Jon did a fantastic job in qualifying and fortunately the track was getting drier and drier so it was a case of whoever crossed the line last was going to be fastest. I’m pleased and looking forward to tomorrow.”

Ben Tuck, Century Motorsport #42 BMW M4 GT4: “If we ever need a pole, now was the time! It’s really great that we’ve managed to get it done, on the last lap as well. I scared myself as I went too deep into the final corner and I thought I had messed it up.

TYRE INFORMATION – PIRELLI
Pirelli supplies the GT3 class with the P Zero DHD2 tyre, which was introduced at the start of the 2018 season for GT racing around the world. The GT4 class uses the P Zero DH tyre. In the event of rain, both classes will use the Cinturato WH wet-weather tyre.

Jonathan Wells, Pirelli UK motorsport manager: “We are looking forward to another exciting British GT Championship decider at Donington Park. The circuit is similar in nature to the venue of the previous round, Brands Hatch. It is a fast and flowing track, something best demonstrated by the Craner Curves early in the lap: high-speed bends that subject the tyres to high lateral forces.”