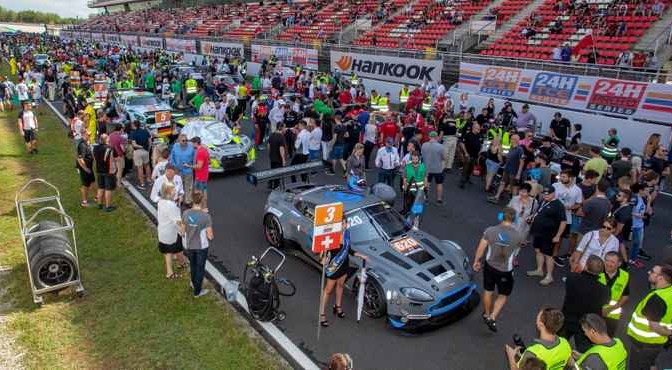 The Bohemia Energy racing with Scuderia Praha Ferrari 488 GT3 (#11, Jirí Písarík / Josef Kral / Matteo Malucelli) leads the 20th running of the Hankook 24H BARCELONA after four hours of running. The Czech-run Ferrari is the first non-Mercedes-AMG GT3 to lead the event outright, is the only non-Mercedes in the top five at present, and is gunning for its third overall race win of the 2018 24H SERIES powered by Hankook season.

The Munckhof Racing BMW M4 (#259, Eric van den Munckhof / Marcel van Berlo / Ted van Vliet / Marco Poland) completes the overall TCE podium and leads the SP3 class after a frenetic start for former category leaders, CWS. The #278 Ginetta G55 GT4 (Michael Jensen / Nick Adcock / Adam Hayes / Matthew Nicoll-Jones / Finlay Hutchison) had started from TCE pole position and led the sister #178 entry in the opening stages, but drama unfolded just before the two-hour mark when the Ginetta erupted into flames on-track. The #278 was retired on the spot, but fortunately, nobody was injured in the blaze.

This left the sister CWS entry (#178, Colin White / James May / Paul May / Steven Wells) in the overall lead of TCE, but the Ginetta would eventually drop back to 2nd in-class following a close encounter with the R-Motorsport Aston.

The 2018 Hankook 24H BARCELONA will continue uninterrupted throughout the night before the chequered flag is flown at 12.00 hrs local time on Sunday. Live timing and live streaming of the race in HD quality with commentary by Radiolemans.com will be available on the series’ website. The streaming will also be uploaded on the series’ Youtube channel. Regular updates will be published on Twitter (@24HSeries), Facebook (24H Series) and Instagram (24H Series). Further information can be found at www.24hseries.com.