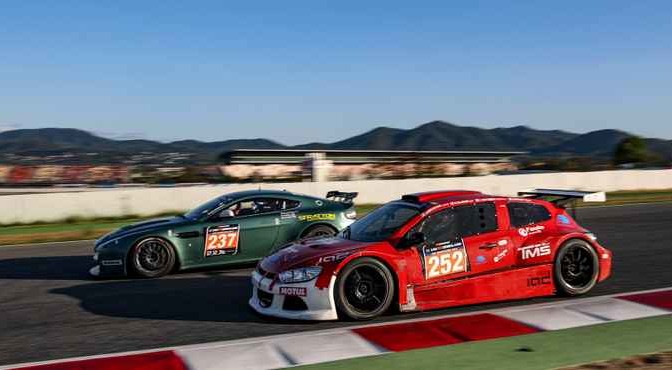 The Barcelona 24-hour race started as a national touring car race in Spain and was held as such from 1998 until 2009. Although the number of foreign competitors increased, especially with a considerable contingent of Dutch amateur racers making the trip every year, the national organisers were struggling to fill the grid. Thus, in 2010, the race was cancelled altogether, but in 2011, Dutch promoter CREVENTIC came on board to help revive the event in close co-operation with the circuit and the RACC. As a result, the race has now become firmly established as one of the classic international 24-hour races. Held as a touring car-only event last year, GT cars are now admitted again as well and interest for the event is considerable with over 50 cars expected on the grid for this year’s race. The ‘Trofeu Fermí Vélez’ subtitle honours Spanish sports car racer Fermí(n) Vélez, a two times’ winner of the Sebring 12 Hours (1995,1997), who passed away after an illness in 2003. The overall winner of the race will again receive the trophy named after him, to be presented by his family.

With 29 GT cars and 22 touring cars entered so far, the field for this year’s race has no lack of variety. Aston Martin, Audi, Ferrari, Mercedes-AMG and Porsche are all represented in the A6 category, predominantly for GT3 cars. In the SPX class, the cars range from KTM X-BOW, Vortex 1.0 and MARC Focus V8 to Lamborghini Super Trofeo and Porsche 991. The Porsche 991 Cup class has five cars from four different teams entered while one Mercedes-AMG GT4 will be up against three Ginettas in the GT4 class. One of the Ginetta teams is the locally-based NM Racing Team that won the Hankook 24H BARCELONA on its debut last year.

The TCR class with 16 entries spearheads the touring car field. It doesn’t come as a surprise that SEAT and Cupra TCR cars have a huge presence in the home event of the two brands, but fierce competition can be expected from teams with Hyundai, Audi and Peugeot. Two Ginettas and one BMW in SP3 and a pair of Hondas and a BMW in the A3 class round out the field.

In the field with drivers and teams from no less than 25 different countries, various lady racers are expected as well. Swiss Chantal Prinz, the reigning 24H SERIES Ladies’ Cup winner and one of the drivers of the Hofor-Racing Mercedes-AMG GT3, is a regular, but lets not forget the presence of Naomi Schiff and Laura Kraihamer, both with the True Racing KTM X-BOW, as well as Spanish motorcyle ace Laia Sanz, a 13 times’ world trial champion, and Alba Cano Ramirez, who are two of the drivers entered to race the Cupra Racing-Monlau Competicion Cupra TCR.

With the Super 7 Race Series and the Spanish Formula 4 Championship as the two official support categories, the Hankook 24H BARCELONA has an attractive programme. Following optional private tests on Thursday, 6 September and on Friday morning, 7 September, official track action for the 24-hour race starts with free practice on Friday at 14.45 hrs, followed by qualifying at 17.30 hrs and night practice at 21.00 hrs. The Hankook 24H BARCELONA starts at its usual time, on Saturday, 8 September, at noon, and ends on Sunday at the same time.

Live streaming in HD quality with commentary from the Radio Show Limited team, well-known from IMSA Radio and Radio Le Mans, is available on the series’ website and Youtube channel as well as Motortrend on Demand. There will also be regular updates on Twitter, Facebook and Instagram (24H Series). Hankook is the official title sponsor and exclusive tyre supplier for the event, Panta is the official fuel supplier. The following companies will be present with sales and service booths in the paddock at Barcelona: DRD international for pit equipment, screen protection etc., Speedcom for radio communication equipment and support, Aircharge, specialised in wireless mobile charging products, and Circuitvanhout that has produced the beautiful new trophies for the prize-giving ceremony. Further information can be found at www.24hseries.com