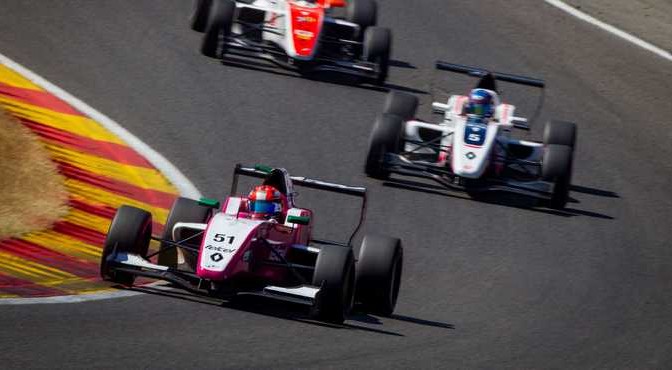 The world-renowned circuit of Spa-Francorchamps featured the sixth season round of the Formula Renault Eurocup as a support act for the famed 24 Hour race at the Belgian venue. The AVF team continued its hunt for the top 10 with the closest driver to the target was Eliseo Martinez, who took 12th in race 2, just 1″3 away from the points.

The Belgian trip provided a tough logistical challenge for the squad led by Adrián Vallés. Due to the unique scheduling of the event, the first free practice sessions took place on Wednesday, just three days after the Red Bull Ring round. Despite the short timing, AVF was prepared to be on track as usual.

Then, in Qualifying 1 on Thursday evening, Martinez set an interesting 7th fastest lap in Group B, which enabled him to start from 13th place in race 2 and to fight for a points finish. In race 1, the Spaniard reached the 15th position, while team-mates Christian Munoz and Xavier Lloveras were 21st and 22nd respectively. They gained even more mileage and experience on Saturday when the young Colombian ended up 17th and Lloveras was 14th.

On the other hand, bad luck hit Axel Matus, who was forced to retire from both races. The Mexican talent will try to go for a rebound in the next round at Budapest, after the August break.