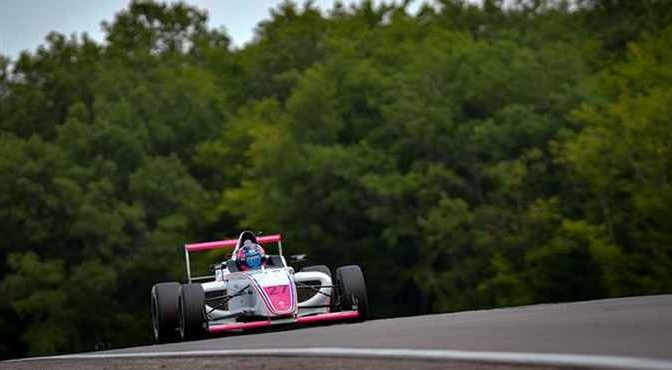 On the famous and fast circuit of Dijon-Prenois, which marks the mid-season for the drivers in the FFSA Academy French F4 Championship, pole position changed hands several times. Between Ugo De Wilde, Adam Eteki and Pierre-Louis Chovet, the suspense lasted several laps and finally the Belgian De Wilde was awarded a superb pole position. He will start at the front of Race 1 in the late afternoon, while Adam Eteki will do the same Sunday in Race 3, the grid being established according to the second fastest time for each driver.
The heat is on at the meeting this weekend in Burgundy! At the wheel of their FIA F4 car, the drivers entered in the Championship managed by the FFSA Academy had to deal with a rapid rise in temperature for the tyres during the Qualifying session, as explained by the Belgian Ugo Wilde. “Qualifying lasted more than 20 minutes, but it was in the first third of the session that we absolutely had to exploit our new set of tyres. With the technical team and my coach, we worked in this direction and it paid off. After setting the fastest time in Free Practice on Friday, I was confident and I was able to confirm this by taking pole.”

The Frenchmen Adam Eteki and Pierre-Louis Chovet also had an excellent start to the session, before being surprised by De Wilde. Eteki, however, drew a positive balance from this intense session. “Qualifying remains an important part of the meeting and I am happy to be able to start 2nd in Race 1 and 1st in Race 3, as my second fastest time was also excellent. It was important to choose the right pressures to optimise tyre performance and that’s what I managed to do,” said Adam.

“A 3rd place in this qualifier and a front outside line for Race 3 on Sunday afternoon is still a good result,” said Pierre-Louis Chovet. “I was missing a little more performance in sector 2 to aim for pole position. In any case, the races are predicted to be unpredictable. In a straight line, the slipstream should facilitate overtaking, while tyre management will probably be one of the keys of the meeting. The circuit of Dijon-Prenois uses the rubber a lot and it will be an important parameter to take into account.”

Four drivers in the same tenth

The Brazilian Caio Collet and Theo Pourchaire have never been very far from the top three, sometimes running in the top three early in the session. They also finished in the same tenth as Eteki and Chovet. Collet will start in 4th position twice, while the young Pourchaire appears again as the best in the Junior Championship.

Ranked in the following places, the Belgian Ulysses De Pauw, Monegasque Arthur Leclerc and the French Theo Nouet conceded only a few tenths to the fastest in Qualifying and will certainly have an important role to play at each start. Thanks to his consistency, Leclerc will also start 5th in Race 3 ahead of Pourchaire. The two Muth brothers completed Qualifying in the top 10, with Esteban outpacing O’Neill by a few hundredths.