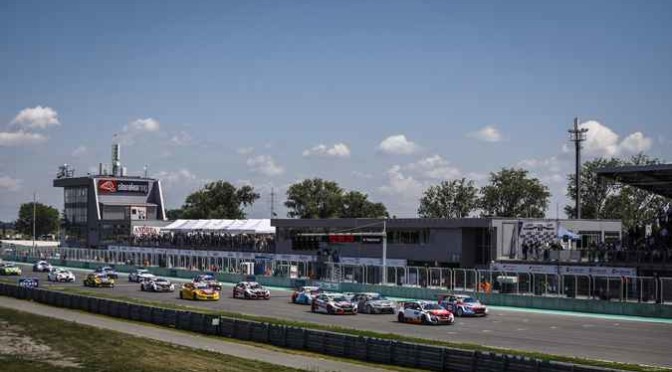 Pepe Oriola claimed his and the Cupra TCR’s first victory of the season at WTCR Race of Slovakia after a dramatic opening race for the WTCR – FIA World Touring Car Cup presented by OSCARO at the Slovakia Ring this afternoon.

The Team OSCARO by Campos Racing driver benefited from a poor start for DHL Pole Position winner Gabriele Tarquini, then passed DG Sport Compétition’s Aurélien Comte to take a lead he would not lose despite having to defend following a mid-race safety car period.

“The car was fantastic,” said a delighted Oriola, winner number 10 in WTCR OSCARO. “I was a bit worried with the safety car, but I was able to build a good gap. I’m really happy for my sponsors and to give Cupra its first win in the WTCR. Now I’m looking forward to the second qualifying session this afternoon.”

Oriola made his move for the lead on lap two, passing Comte as Vernay also took advantage of the PEUGEOT’s lost momentum to further demote the Frenchman. Comte then dropped to fourth as Tarquini recovered one of his lost places on lap three.

The Audi R8 safety car interrupted the action on lap five after Frédéric Vervisch’s Audi Sport Team Comtoyou Audi was stranded next to the track after the Belgian went off.

Racing resumed on lap seven after Oriola had backed up the field before accelerating hard out of the final corner. The stewards investigated his actions, but decided upon nothing more than a warning. “I needed to open up a gap again, so I slowed everyone down,” said Oriola. “It is the leader’s choice, so I don’t think it would have been fair to be penalised.”

Oriola kept clear of Vernay to win by 1.734s, with Tarquini taking a consolation podium following his poor start and ensuring three customer racing brands filled the top three places. Oriola’s win also means six customer racing brands have triumphed in WTCR OSCARO.
Comte clung on to fourth place despite a determined challenge from Fabrizio Giovanardi, who delivered Team Mulsanne its first points in his Alfa Romeo Giulietta TCR. The Italian rose from P12 on the grid to a P5 finish after a brilliant drive.

The YMR Hyundais of Yvan Muller and Thed Björk made good progress up the field after their back-of-the-grid penalties following qualifying, but both just missed out on scoring points. Muller finished in P12 behind Zengo Motorsport’s Norbert Nagy, with Björk in P13 after both Hyundais demoted local hero Mato Homola in the closing stages, the Slovak struggling with handling issues following early contact.

BRC Racing Team’s Norbert Michelisz, whose Hyundai was also demoted to the back of the grid after qualifying, fared less well. He could only finish in P23 behind wildcard entry Andrej Studenic in his Brutal Fish Racing Team Volkswagen Golf GTI TCR. The other wildcard, Petr Fulín, finished in P15 in his Fullin Race Academy Cupra.

ALL-INKL.COM Münnich Motorsport’s Esteban Guerrieri was out of luck in his Honda after contact on the first lap forced him to pit with left-rear suspension damage. The Argentinian, who had started fourth on the grid, lost what looked to be a certain top six finish.

Second Qualifying at WTCR Race of Slovakia takes place from 15h10 local time. Race 2 follows at 19h00. Click here to find out how to watch the action live.