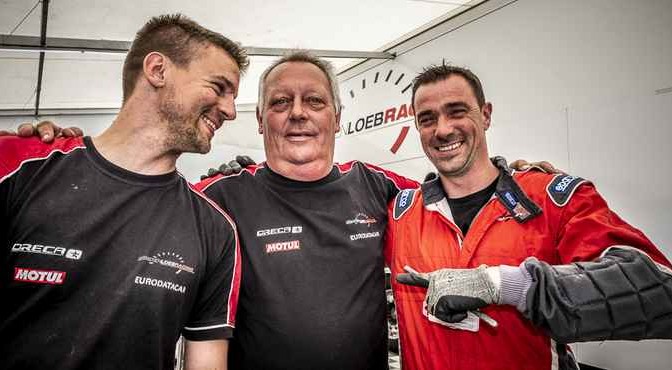 The whole Sébastien Loeb Racing team set off for Sweden for the sixth round of the FIA World Rallycross Championship. The event took place on the Höljes circuit, the blue-riband venue for this branch of motor sport, and it gave the SLR team the opportunity to discover one of the premier tracks in the championship and its unique ambience. After a difficult weekend, Grégoire Demoustier is already looking ahead to Canada where the next round on the calendar is being held.

Grégoire Demoustier (Sebastien Loeb Racing driver); “From a sporting point of view it was a difficult weekend, but what will stick in my memory is that I discovered a superb track and an exceptional ambience on this incredible circuit that attracted a huge crowd. It’s great that it was such a success!”

>From Mettet to Lohéac by way of Silverstone and Riga, Greg opens the doors of Sébastien Loeb Racing to you by spotlighting a member of his team race after race. This week it’s the turn of the team’s cook, Jacques.

“As I’ve done since the start of the season I’m going to introduce you to a member of our team and today it’s our cook, Jacques. He looks after the whole catering side and the welcome for the team and its guests. He’s a really great guy. He always goes to great lengths to meet everybody’s needs and lavishes attention on each and every one of us. He’s a bit like a “nanny” in fact! He’s always ready with a joke and he’s always in good humour. And, of course, it shouldn’t be forgotten that without him we’d all die of hunger! Even if he won’t be with us in Canada I’m looking forward to seeing him again in Brittany in September.”

Jacques Permin, the Sébastien Loeb Racing team’s chef: “I’m lucky to have been a part of Sébastien Loeb Racing since the start of the season. It’s a really great team and everybody’s very pleasant. Whether it’s with the staff or with Greg we all get on like a house on fire. I really feel that I belong to a family. I’ve worked for quite a few teams and I’ve rarely had this kind of feeling. There’s great mutual respect between all the people and I love coming to work at the races. I don’t really have a typical day, but I do all the cooking for the team and the guests. My role is to make sure that everybody has what they need so that they can fully focus on their job. For example, this weekend I got up at 5:30 a.m to get breakfast ready for the mechanics as they couldn’t have it that early in their guest house. I try to please everybody by giving them their favourite dishes. The mechanics love chocolate, while Greg likes salmon, meat and pasta. One of my favourite moments is when the whole team sits down to eat together. It’s really a delight to work with a driver like Greg and I’m ready to leave for every race weekend with him and his girlfriend, Pauline. He’s a really nice guy!”