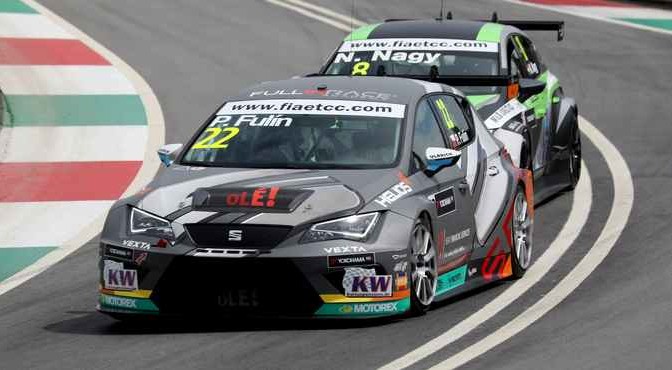 Local racers Petr Fulín and Andrej Studenic have been handed wildcard status for WTCR Race of Slovakia next week, which signals the start of the second half of the inaugural WTCR – FIA World Touring Car Cup presented by OSCARO.

Fulín, from neighbouring Czech Republic, won the FIA European Touring Car Cup in 2017, while Slovak Studenic has been competing since 1992 and has enjoyed stints in hillclimb, touring car racing and, more recently, sportscars. He also has experience working as an engineer and coach.

They will join the 25 all-season WTCR OSCARO drivers at the Slovakia Ring from 13-15 July with 41-year-old Fulín competing in a Cupra TCR under the Fullin Race Academy banner and Studenic, also 41, armed with a Volkswagen Golf GTI TCR run by Brutal Fish Racing.

Ful speed ahead: European champion steps up
After winning the FIA European Touring Car Cup in 2017 having come agonisingly close to title glory in the two previous seasons, Fulín was quick to finalise his participation at WTCR Race of Slovakia as a wildcard.

“On one side it was difficult because we had to find the money but, on the other side, maybe it’s the last opportunity for me to be inside WTCR together with great drivers like Yvan Muller and Gabriele Tarquini,” Fulín explained. “They are not really old but they could soon decide to finish their career so I said I had to be there. Life is short and we have to enjoy it so we decided to race.

“Our goal is to enjoy the weekend and to have a nice experience. We know the track but we have the oldest car and will have 20 kilograms more inside for the wildcard handicap. Also, the competition will be very strong and [the last event in] Vila Real showed that drivers are able to learn new tracks very quickly. That’s why we are pushing everything preparing for the weekend. Maybe this championship could be something new [for us] for next season.”

Fulín has been a regular in TCR Germany this season with a second place at Oschersleben and a victory at his home track, Most, to his name. He’s also planning a TCR Europe appearance in Barcelona later in the year.

Studenic brings experience to WTCR OSCARO
Joining Mato Homola as the second Slovakian driver on the WTCR OSCARO grid next week, ‘Andy’ Studenic has enjoyed significant success over the years in hillclimb and circuit racing. Starting out as a 16-year-old, Studenic has sampled a wide variety of machinery from a ŠKODA Favorit to a Ferrari 458 GT3. His most recent triumph came at the Slovakia Ring in 2016 when he won the track’s 24-hour event in a SEAT León TCR.

“Thanks to Mato Homola we got an offer from the WTCR OSCARO promoter to sign up for the WTCR Race of Slovakia,” Studenic explained. “As a team we race in TCR Europe and TCR Middle East. Because of my vast racing experience, the team decided to line me up for the occasion.

“Our Brutal Fish Racing Team owns two Volkswagen Golf GTI TCR cars and I coach our two drivers. I’ve only driven this car for a few dozen kilometres, which is very little compared to the WTCR competition. I do have a lot of racing experience, but not with this type of touring car. I hope the two free practice sessions will be enough for us to set up the car and get a clearer view.

“Naturally we have ambitions, without them we wouldn’t be racing at all. However, I have no clue how we’ll stand up to the experienced competition.”

The wildcards so far
A maximum of two wildcards per event are being given the opportunity to race in WTCR OSCARO in 2018. Championship promoter Eurosport Events, with the approval of motorsport’s world governing body, the FIA, will select candidates based on performances at national level, their potential as future full-time WTCR drivers or if their participation has the potential to attract additional interest from fans and media. So far, the following drivers have enjoyed wildcard status: