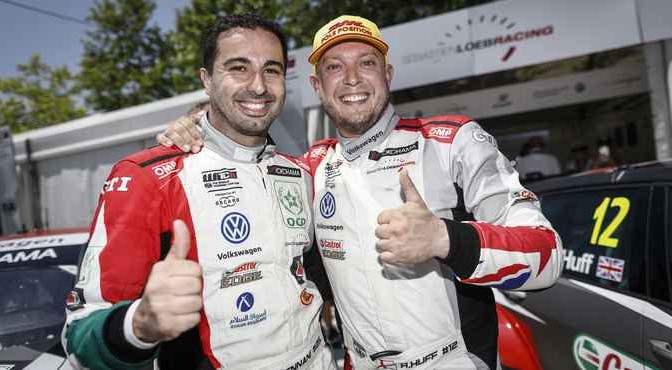 Last weekend, the two drivers in the Sébastien Loeb Racing team Rob Huff and Mehdi Bennani went to Portugal to race in the WTCR Race of Portugal in the World Touring Car Cup on the Vila Real circuit.

Huff was on the pace straight away in qualifying and clinched the DHL Pole Position, his second this season, closely followed by his team-mate, Mehdi Bennani, who was second quickest.

On Saturday afternoon the two Volkswagen GTI CTRs lined up on the front row of the WTCR Race of Portugal after an exceptional performance in qualifying.

Unfortunately, in the second corner the two cars slammed into the guardrail after tagging each other leading to a spectacular pile-up. The race was immediately red-flagged as the city circuit’s layout provided no room for run-off zones.

No drivers were hurt in the incident, but Huff and Bennani were transported to hospital for precautionary examinations. This was how the Portuguese event ended for the two Sébastien Loeb Racing drivers and both cars were destroyed.

“The weekend got off to a great start and we had high hopes after the excellent work carried out by the team in free practice and qualifying. Unfortunately, it quickly turned into a nightmare. There’s no other word to describe it. But the main thing is that both our drivers, Rob and Mehdi, were okay. The time we spent waiting to find out how they were seemed to go on forever. My thoughts are with them and I wish them both a speedy recovery. We missed out on a weekend in which we should have scored a great result, but now the whole team is motivated to tackle the event in Slovakia. We’re going to be burning the midnight oil over the few days that separate us from the next event. It’s extremely rare to have two cars destroyed in the same race. Now we have no other choice but to work hard to present two new cars that meet our standard of quality and get back to our usual top-class level in Slovakia in two weeks.” Dominique Heintz, Sébastien Loeb Racing Team Principal.

“I’m really very sorry for the whole team as it should have been an exceptional weekend for us. My team-mate, Mehdi Bennani, and the Volkswagen Golf GTI TCRs prepared by Sébastien Loeb Racing were very quick, but unfortunately these things happen in motor racing. Now we just have to look ahead and prepare for the next race in Slovakia. As the two cars were destroyed we’ll have two new machines for the next race, which means twice as much work for our guys. Our aim is to put on as good a performance as possible to thank them for all the work they do for us. I’d also like to say a big thank you to all the people who sent us messages of support. It’s very touching and makes a big impression to see the number of people who were worried about our health after this weekend.” Rob Huff

“Obviously, the weekend was too short even though it got off to a great start as I was on the pace and the car’s setup was spot on. Rob and I were exceptionally motivated to make a good start on the Vila Real circuit. My getaway was okay and I got through the first corner without problems; at that moment I reckoned I could tackle the second in the same way, side-by-side, as we knew it was possible. Unfortunately, we don’t really know what happened; we collided and hit the guardrail. It’s really a pity to finish the weekend like that, but the team Rob and I are all in a positive frame of mind as we’re about to tackle the event in Slovakia. After a bit of rest we’ll make it a point of honour to mobilise all our energy to come away with a good set of results from the Slovakiaring.” Mehdi Bennani.

Next round of the 2018 FIA WTCR for the Sébastien Loeb Racing team is in Slovakia on the Slovakiaring on 13-15 July 2018.