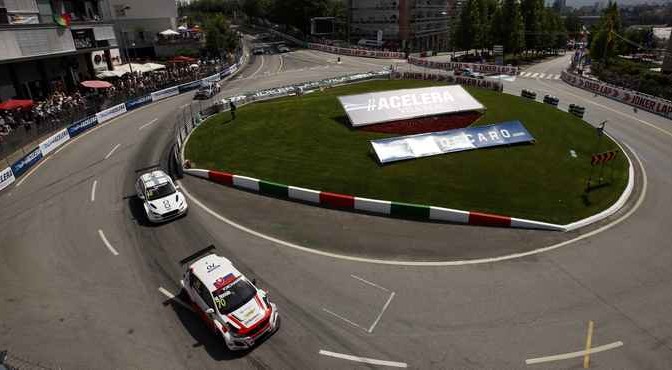 Thed Björk proved he was the Real deal with the ultimate comeback performance in the WTCR – FIA World Touring Car Cup presented by OSCARO, winning Race 3 on the streets of Vila Real as Mato Homola became the ninth different winner in 15 all-action rounds by triumphing in Race 2.

Björk was involved in the multi-car accident in Race 1 on Saturday, his Hyundai i30 N TCR momentarily catching fire and requiring his YMR team to work through the night to repair it for Sunday’s Second Qualifying. Showing no ill effects from the crash, Björk landed the DHL Pole Position for Race 3, which he converted into win number two of 2018.

Homola’s moment in the spotlight came in Race 2. Starting third on the grid aboard a DG Sport Compétition PEUGEOT 308TCR, the Slovak belied his lack of Vila Real track knowledge to defeat Race 1 winner Muller, who waited until the penultimate lap to take his ‘joker’ lap but was unable to stop Homola from sweeping ahead as he re-joined.

Muller’s victory in Race 1 and second place in Race 2 puts him back on top of the WTCR standings heading to Slovakia next month. Touring car racing’s most successful driver heads Gabriele Tarquini and Yann Ehrlacher, who are joint second, with Björk and Jean-Karl Vernay next up.

Tarquini, who finished second in Race 3 ahead of Hyundai-powered BRC Racing Team team-mate Norbert Michelisz, battled the effects of a fever, while Michelisz was nursing an injured right hand, sustained in the Race 1 accident.

Pepe Oriol impressed with podiums in Race 1 and Race 2 and a strong fourth in Race 3 for Team OSCARO by Campos Racing. The Cupra-driving Spaniard scored 50 points across the sun-drenched Vila Real weekend to earn TAG Heuer Most Valuable Driver status as Björk took the TAG Heuer Best Lap Trophy.

Esteban Guerrieri finished second in Race 1 for ALL-INKL.COM Münnich Motorsport after the German squad won a race against time to repair the Argentine’s Honda, which suffered extensive damage in the multi-car accident. Team-mates Yann Ehrlacher and James Thompson were also caught up in the incident with Thompson’s car too badly damaged to continue. Ehrlacher made it through to the DHL Pole Position shootout on Sunday morning following through-the-night repairs but two sevenths were as good as it would get for the erstwhile championship leader.

Gordon Shedden started the reverse-grid Race 2 from first place but a track limits infringement earned the Audi Sport Leopard Lukoil Team driver a five-second penalty and dropped him to sixth. Comtoyou Racing’s Frédéric Vervisch was one of a number of drivers to gain from the ‘joker’ lap, taking sixth on the final lap of Race 3 having started P21. Vila Real resident Edgar Florindo made the most of his wildcard opportunity to finish as the top Portuguese in P12 in Race 3.

Race winner quotes
Yvan Muller, YMR (Race 1): “I don’t know how it happened exactly at the front [between Mehdi Bennani and Rob Huff] because I did my best worst start of my career. I missed my start and that was lucky for me because I was not in the pack [when the crash happened]. I only have one car to repair and pay for tonight instead of two. But yes, Thed’s [Björk] car is quite damaged and they will spend all night working on it. This a victory and I’ll take it of course. It’s important for the points. But I would like to think of Rob and Mehdi. They were the fastest today and they should probably be on the podium, but unfortunately racing is as it is. It’s a victory, but not a real one.”

Mato Homola, DG Sport Compétition (Race 2): “I know that when [Gordon] Shedden went into the ‘joker’ I need to push a lot and together with Yvan he was really pushing. After my ‘joker’ lap I needed to really push again but I was pushing all race so nothing changed. After Yvan took the joker I was counting the distance between us. It was awesome and thank you to all my supporters, all my sponsors and Slovakia. I’m really proud and proud for my team. They did a lot of good job after Zandvoort. It’s a great way to be heading into my home race. I’m looking forward to Slovakia.”

Thed Björk, YMR (Race 3): “The team did a fantastic job. They repaired the whole car all through the night and worked all night. The first lap I did this morning in Q1 they were cheering, it was so fantastic. I had a great feeling all day and forget about the big accident. It was such a nice car, unbelievable. I had the speed. But you see Norbert, he damaged his hand. It was a tough weekend in many ways. I can only be happy to win, but I am also happy to be here in Vila Real because the people here are fantastic. The ‘joker’ lap adds spice for this track because it is so difficult to overtake. So I think it is good with the joker.”

What’s next? WTCR Race of Slovakia, Slovakia Ring, 13-15 July Slovakia will host the sixth event of the inaugural WTCR – FIA World Touring Car Cup presented by OSCARO, a move ratified by the FIA World Motor Sport Council on 7 June. It replaces Argentina – on what will remain a 10-event calendar – in response to the country’s challenging economic climate. By joining forces with the FIA European Truck Racing Championship, WTCR Race of Slovakia will deliver a diverse weekend of motorsport with a sell-out crowd expected. Built in 2008 and located 40 kilometres east of the capital Bratislava, Slovakia Ring hosted the WTCC for five seasons from 2012.