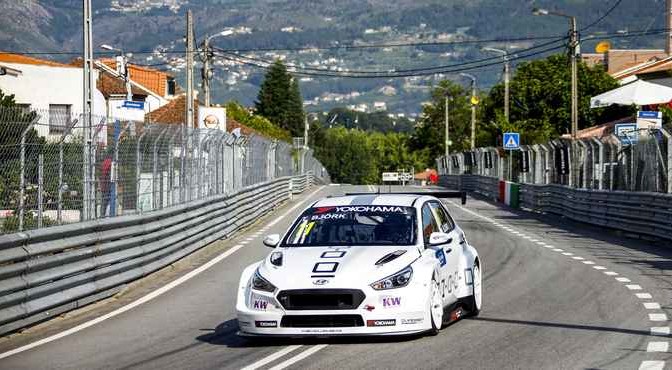 Thed Björk repaid his hard-working YMR mechanics who toiled all night to repair his car by securing his fourth WTCR – FIA World Touring Car Cup presented by OSCARO DHL Pole Position of the year with a fantastic qualifying performance at WTCR Race of Portugal in Vila Real.

The Swede, whose Hyundai i30 N TCR was badly damaged and even caught fire during the multi-car accident in Race 1 on Saturday, blitzed the top-five Q3 shootout to knock BRC Racing Team’s Norbert Michelisz from the top spot.

“It was a fantastic lap,” said the 2017 FIA World Touring Car champion. “The feeling driving the car, which the guys worked on all night, was perfect. I think they’ve had about half an hour’s sleep. I’m so proud of them.”

How the battle for the DHL pole unfolded
Björk was quick from the start and looked set to end up on top of the 30-minute Q1 session, which was interrupted by two red-flag stoppages. The first was to clear Frédéric Vervisch’s Audi Sport Team Comtoyou Audi RS 3 LMS from the circuit after the Belgian clobbered a kerb at a chicane and came to a halt. The second stoppage was for Tom Coronel, who rattled into a barrier in his Boutsen Ginion Racing Honda Civic Type R TCR.

With only the top 12 graduating to Q2, the drivers faced a frantic dash to make the cut once the session restarted with just under four minutes remaining. Among those under threat to miss out was Gabriele Tarquini in his BRC Racing Team Hyundai. But the Italian put in a brilliant lap to jump from P20 to the very top of the times at the expense of Björk and Muller.

The late shuffle left a dozen drivers disappointed to drop out at this stage. Comtoyou Racing’s Nathanaël Berthon just missed out in P13, as did DG Sport Compétition’s Aurélien Comte in his PEUGEOT 308TCR.

The biggest shock was Esteban Guerrieri, who could only manage P19 in his ALL-INKL.COM Münnich Motorsport Honda. The Argentinian, who finished second in Race 1 on Saturday, was mystified by his failure to progress. “I don’t know,” he shrugged. “We had an initial gearbox problem, but we just couldn’t find the pace. Very disappointing.”

Both Team Mulsanne Alfa Romeo Giulietta TCRs missed the cut, Fabrizio Giovanardi only qualifying in P15 and Gianni Morbidelli in P20. Others to go no further included Vila Real resident and wildcard entry Edgar Florindo, who was P17 in his Veloso Motorsport Cupra TCR.

Shedden celebrates after eventful Q2
The 15-minute Q2 was eventful, as Yann Ehrlacher and Yvan Muller suffered punctures in the early stages. Ehrlacher then recovered perfectly to go fastest from Björk, before the Swede hit back with a fantastic lap. His time of 1m59. 946s was the first sub two-minute effort of the weekend.

The top five headed through to the one-at-a-time Q3 shootout. Joining Björk and Ehrlacher was Tarquini, Pepe Oriola in his Team OSCARO by Campos Racing Cupra TCR and Michelisz in his BRC Hyundai.

Comtoyou Racing’s Aurélien Panis was unlucky to miss the cut with P6 in his Audi RS 3 LMS, ahead of Jean-Karl Vernay, DG Sport Compétition’s Mato Homola in his PEUGEOT 308TCR and a disappointed Muller. Unlike his nephew Ehrlacher, the Race 1 winner wasn’t able to find the required pace after his puncture.

Michelisz first to go but settles for second
In the Q3 shoot-out Michelisz was the first to run and set a controlled, smooth lap to log a strong time of 2m00.164s. Oriola was next in his Cupra, the Spaniard setting a time 0.262s off Michelisz’s benchmark.

Now it was Tarquini’s turn. The veteran, who earned three WTCR victories early in the season, is determined to return to race-winning form. But his lap wasn’t good enough on this occasion to bump team-mate Michelisz from provisional pole, setting a mark 0.155s off the Hungarian’s lap.

Ehrlacher followed next, but made a mistake on his lap and was more than a second off Michelisz’s time. That left just Björk to go – and the Swede was not to be denied.

The YMR Hyundai scorched across the line to set a time of 1m59.824s to secure the top spot and the DHL Pole Position for Race 3. Michelisz will join him on the front row, with Tarquini and Oriola on row two.