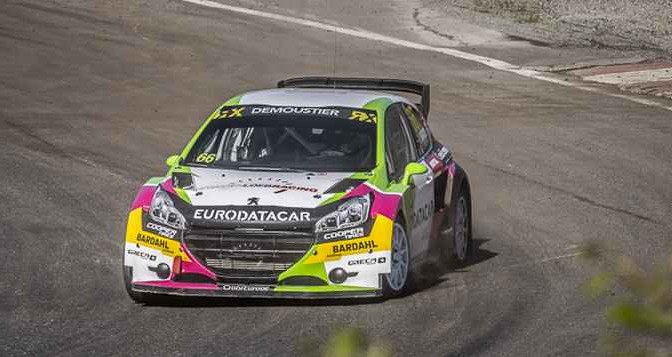 This weekend Sébastien Loeb Racing headed north for the fifth round of the FIA World Rallycross Championship in Hell in Norway. Grégoire Demoustier discovered a new circuit for the first time this season as he continues to learn the ropes in this branch of motor sport. Despite two difficult qualifying heats in Q1 and Q3, the Belgian driver managed to achieve the target time set in Q4 while also testing different setups that will be necessary for forthcoming events this season.

Grégoire Demoustier (Sébastien Loeb Racing driver): “For the first time this season I discovered the circuit during the race meeting. It wasn’t easy and we suffered a few setbacks. First of all, we lost a wheel in Q1 due to a mechanical breakage and in Q3 I jumped the start so it was a more difficult weekend than usual. Despite everything, we gathered more useful information and we were able to test setups that worked more or less: we accumulated experience. I’d have liked to have been quicker, but in Q4 it gave me great satisfaction to break the forty-second a lap barrier, which was the aim I set myself for the end of the meeeting. Overall, I’m feeling fairly chuffed.”
The story

>From Mettet to Lohéac by way of Silverstone or Riga, Greg takes you behind the scenes of Sébastien Loeb Racing by highlighting a member of its team race after race. This week, it’s the turn of the team’s truckie and tyreman, Maxime Rey.

“As I do at the other events I’d like to highlight a member of the team and this time I’d like to talk to you about Max, our truckie and tyreman. Working with him is a real pleasure as he’s really taken his job to heart. He’s a very nice conscientious bloke and like the rest of the team, he works very hard. He does a lot of driving to bring the equipment to the events; he’s always smiling and he takes his job as tyreman very seriously. It’s really pleasant and easy to work with Max. I’ve rarely seen anyone so single-minded and involved in what he does.”

Maxime Rey (truckie and tyreman at Sébastien Loeb Racing): “First of all, a little bit about myself. My name is Maxime and I’ve been working for Sébastien Loeb Racing since 2014. I’ve been involved in several championships like the Porsche Carrera Cup, the WTCC, the ELMS and this season is my first in the WRX. The same goes for the rest of the team. I drive the transporter that carries all the equipment and I’m also a tyreman so I look after the tyres during the race weekend. Coming to Norway was quite a trip! I left the workshops last Saturday in the early afternoon and crossed Germany to catch the boat in the north of the country. I arrived in Oslo on Monday in the late morning and I waited patiently to clear customs. I then drove on to the circuit, which I reached on Wednesday morning. We set up the tent. During the race weekend I do my second job – tyreman. It starts before qualifying when I go to collect the tyres from the official WRX supplier: That’s a total of six sets, in other words twenty-four wheels. Then I wait for instructions from the engineer to mark the tyres before the first free practice session begins. Once the tyres have been marked we give the list to the FIA. Throughout the meeting I adjust the tyre pressures according to the demands of the engineer and the driver. I look after everything that concerns the tyres: their wear, cleaning the rims, making sure that there are always marked tyres on the car, etc. When I have time I help my colleagues the mechanics. I’m delighted to discover a new branch of the sport this year; it’s helps me to boost my experience.”