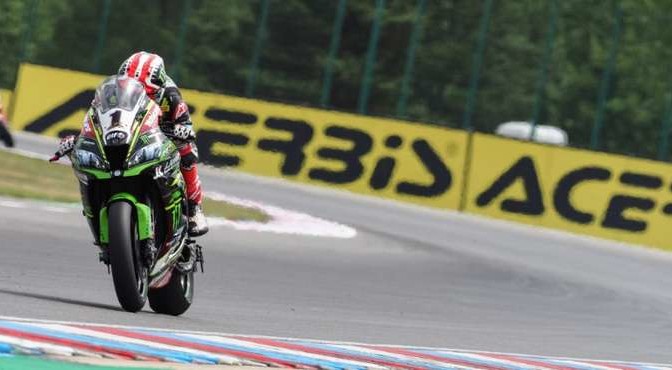 After a winless round at Donington Park, Jonathan Rea (Kawasaki Racing Team WorldSBK) was back in full form on Friday as the MOTUL FIM Superbike World Championship made its return to Automotodrom Brno, with Rea securing the best time in Free Practice 3 and the overall Friday sessions. Making his mark as the man to beat over the weekend, the reigning world champion finished ahead of Tom Sykes (Kawasaki Racing Team WorldSBK) who completed a Kawasaki lock out, with Marco Melandri (Aruba.it Racing – Ducati) in third.

With the first free practice throwing out unusual results due to the damp track conditions, it was the FP2 times that set the bar for the WorldSBK riders in the final afternoon session. Running again on a dry track, only eight riders managed to improve their earlier times – one of those the championship leader – cutting 0.045 seconds off his best lap.

With Sykes running half a second off his previous best and Melandri – the last WorldSBK winner at Brno – not quite able to better his marks, it was Lorenzo Savadori (Milwaukee Aprilia) who ended the day in fourth overall. The Italian therefore makes it into the Superpole 2 once again, confirming that he is extracting more out of the Aprilia each passing round.

Alex Lowes (Pata Yamaha Official WorldSBK Team) managed to take the fifth best time of the day, with Chaz Davies (Aruba.it Racing – Ducati) in sixth, over half a second behind Rea out in front. Donington double marvel Michael van der Mark (Pata Yamaha Official WorldSBK Team) did improve his best lap time in FP3, rising up to seventh by the end of the day.

Michael Ruben Rinaldi (Aruba.it Racing – Junior Team) created more headlines in the final session of the day – although perhaps not how he intended to. The Italian, who led the timesheets in FP1, was running seventh overall and second in the final session’s timesheets when an engine issue left him out of action and the track filled with smoke and oil, forcing a red flag with nine minutes to go. His final time of 2’00.191 was enough to keep him in eighth position, and his slot in tomorrow’s Superpole 2.