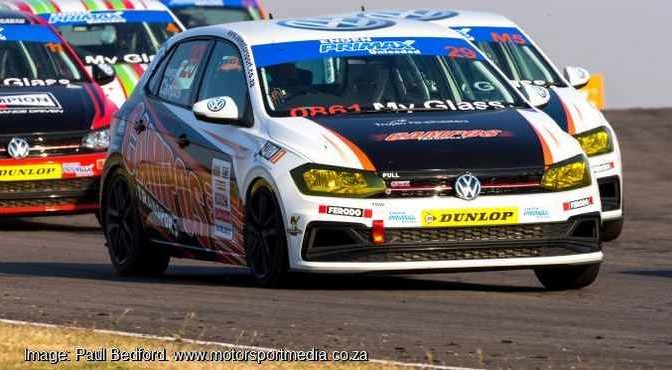 Pepper Racing heads to East London’s Engen Polo Cup races Saturday 16 July with one thing in mind and that is to come back in an even better championship position that it heads there from. Tasmin Pepper dominated to win both races at Zwartkops last time out and she heads to the Border just one point off the championship lead, while teammates Keegan Campos and Shaun La Reservee sit fourth and sixth in the title chase.

“We are going to East London to at least halve our championship positions,” team boss Iain Pepper explained. Tasmin currently sits second, Keagan fourth and Shaun sixth in the title race and if you halve those three numbers we get 1-2-3, so that has to be the objective! “Let’s do it guys.”

Tasmin Pepper can’t wait to get to the Grand Prix Circuit with her Electric Life Pepper Racing Polo. “I am so looking forward to East London,” Tasmin admitted “It’s a fast track and always brings good racing and the crowd is great there, so hopefully we can repeat a weekend like we had at Zwartkops and keep the championship fight going strong!

Keegan Campos and his Campos Transport Pepper Racing Polo have enjoyed a stellar season to sit fourth overall, second in the Junior race and best rookie, all aspects he remains fully focussed on improving his lot again this weekend. “I’m feeling enthusiastic about next weekend after a successful test session last week and I’m excited to see what we can do at the fastest track in SA. “Potter’s will be a make or break for the top 10!”

Shaun la Reservee has had a tougher start to the season in his Alpine Volkswagen Pepper Racing Polo “I struggled a little so far this year even though I have managed to pull a rabbit out the hat to bag some good points, but it’s time to turn all that around and we have done a bit of work before East London, so we should be on the right track — let’s do this!”

Jason Campos sits just outside the championship top ten in his Turn 1 Insurance Polo after completing a Pepper Racing Masters 1-2-3 in the last race and he’s intent on continuing that good form to exorcise some of his early season bad luck. “I know I have the pace, but all we need to do is find that little luck to avoid trouble around me in the races,” Jason admitted. “I can’t wait for East London in the Polo – that first lap is going to be epic – bring it on!”