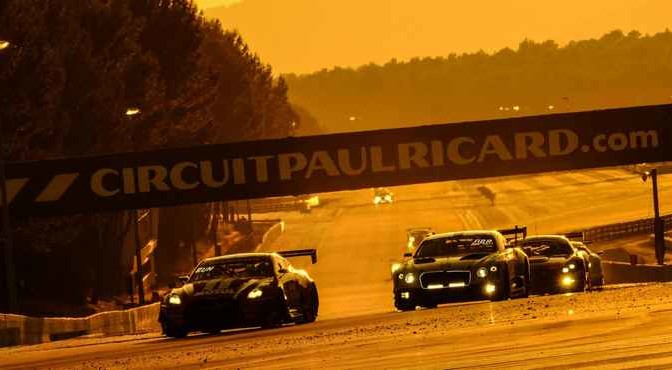 The conclusion to Saturday evening’s Circuit Paul Ricard 1000km was one of the most dramatic in Blancpain GT Series history. That is not an exaggeration. In fact, it might even be an understatement.
After six hours of racing the lead changed with just a handful of corners left to negotiate, sparking jubilation in the Emil Frey Lexus garages and heartbreak among the Bentley Team M-Sport crew.

An incredible fight between Albert Costa and Jules Gounon for overall victory rightly stole the show, but it was not the only story worth telling. Plenty of talking points emerged at the third Endurance Cup event of 2018 – and the last before the Total 24 Hours of Spa.

For the first time this season, Blancpain GT Series teams were allowed to use a single joker pitstop during the Circuit Paul Ricard race. When the joker was used, teams were not restricted to a minimum pitstop time and could turn their car around as quickly as possible.

It led to some fascinating strategic plays during the six-hour contest. The #72 SMP Racing Ferrari assumed the lead late in proceedings after saving their joker for the final stop. Only a suspension issue prevented them from covering this into victory.

But playing the joker early could work, too. The #7 Bentley crew used theirs to vault up the order after the first hour, moving them into the top-four and ultimately the battle for the win.

This was valuable practice for teams. At next month’s Total 24 Hours of Spa, each crew will be able to use a joker pitstop once during each six hours of competition. With four jokers to play, choosing their timing wisely could make the difference between victory and defeat at the 24 Hours.

Among the many remarkable aspects of Saturday evening’s race was the success enjoyed by new machinery.

The winning Lexus is new to the Blancpain GT Series this season and looked a long way from victory during the early rounds of 2018. Having not even registered points before the Silverstone event two weeks earlier, few would have bet on the #14 machine taking top spot at Circuit Paul Ricard.

Bentley and Nissan may have more experience of the series, but both manufacturers are fielding new-spec cars this season. And, while they had shown flashes of pace, neither had looked set to score a breakthrough result at the French venue.

But with the #7 Bentley taking runner-up spot and Nissan’s #23 machine coming home in fifth, it truly was a milestone event for the newer machinery competing in the Blancpain GT Series this term.

The #8 Bentley crew had the pace to join their teammates on the podium at Circuit Paul Ricard. The trio of Andy Soucek, Maxime Soulet and Vincent Abril were running at the front when their Continental GT3 suffered a front-left wheel bearing failure as the result contact. This forced the #8 out of the race, denying them what could have been third spot at the chequered flag.

It was a bitter pill to swallow. Nevertheless, with Abril having set the fastest lap of the six-hour contest, Circuit Paul Ricard provided a clear demonstration of the new Bentley’s pace.

The #72 SMP Racing Ferrari crew of Davide Rigon, Miguel Molina and Mikhail Aleshin will look back on the Circuit Paul Ricard event with mixed emotions. They once again showed excellent speed, holding a comfortable lead after the final round of pitstops, only for a suspension issue to force their Ferrari 488 out of the race.

It was not the first time this season that they had been scuppered late on: at Monza, the #72 machine led from pole and was a strong contender for a home win, before technical problems forced them into the garage.

As such, a seventh-place finish at Silverstone is all they have to show for some very impressive performances. Indeed, no crew has demonstrated more pace in 2018 without scoring a strong result.

V8 Supercars ace Chaz Mostert made his Blancpain GT Series debut at Circuit Paul Ricard. In fact, this was the first appearance in Europe for the Australian driver. He was invited to compete for the ROWE Racing squad by BMW, having shown well for the manufacturer at this year’s Liqui Moly Bathurst 12 Hour.

Mostert shared his M6 GT3 with regular driver Jens Klingmann and series returnee Tom Blomqvist, and the #99 crew had an eventful day. After qualifying in 14th spot a spin dropped them down to 32nd, but the BMW battled back to take sixth at the chequered flag. However, they were later handed a 30-second penalty for speeding at the full-course yellow restart, relegating the BMW to 11th spot.

Mostert commented before the race that he is not slated to contest further events for the ROWE squad this season, though the competitive performance put in by the whole #99 crew will have strengthened his chances of receiving another call-up from BMW.

SOLID SHOWINGS FROM NEWCOMERS AND RETURNEES

BMW duo Mostert and Blomqvist were joined by several other debutants and returning drivers at Circuit Paul Ricard.

Among them, none had a better weekend than Jordan Pepper. The 21-year-old South African was competing in only his second race in the series – the first having come at Spa last season – and ended the evening on the second step of the podium. Not a bad way to start life as a Bentley factory driver.

Gianluca de Lorenzi returned to the series for the first time since 2014, joining the regular Pro-Am pairing of Duncan Cameron and Matt Griffin. De Lorenzi could not have asked for a better comeback race, with the #51 AF Corse Ferrari securing class victory at Circuit Paul Ricard.

Elsewhere, Frederic Vervisch made his first Endurance Cup appearance of the season aboard the #17 Belgian Audi Club Team WRT entry. Vervisch was subbing for Robin Frijns, as he previously did with great success at the Brands Hatch Sprint Cup round, but the #17 Audi could only manage P12 at Circuit Paul Ricard.

One place behind them in the sister #43 car, Alvaro Parente was back in action after missing the Silverstone event. The Portuguese ace was once again alongside Maxi Buhk and Maxi Götz as the #43 Mercedes-AMG scored points at a third Endurance Cup round in succession.

While the breathtaking final lap stole the headlines, the stars of the Circuit Paul Ricard race might well have been the Am Cup winners: Chris Harris, Alexander West and Chris Goodwin.

The #188 Garage 59 McLaren crew backed up their victory from Silverstone with an even more assured run at the French venue. Finishing 18th overall from a field of 50 tells its own story, but it is also worth noting that the Am Cup winners finished ahead of the entire Pro-Am field.

When it comes to class favourites for the Total 24 Hours of Spa, the #188 crew have placed themselves at the top of the pile.

With the #1 Belgian Audi Club Team WRT machine retiring from the Circuit Paul Ricard race after two hours, the gap at the top of the overall championship has narrowed considerably.

But what was formerly a comfortable advantage over the chasing pack has now become a slender lead. Raffaele Marciello is emerging as the WRT boys’ chief rival for the title this year, and he is now just 6.5 points off the lead after banking a fourth-place finish at Circuit Paul Ricard.

In the overall teams’ standings, WRT lead the way on 92.5. AKKA ASP Team have closed the gap, with 78 their score after five rounds, while Emil Frey Racing have moved into contention on 74.5 points – a remarkable turnaround after their slow start to 2018.

In the Endurance Cup championship, Emil Frey Racing top the teams’ standings after three rounds, 21 points clear of the WRT squad. The #1 WRT crew of Mies, Riberas and Vanthoor hold a small advantage in the drivers’ table, with the #14 Emil Frey trio of Albert Costa, Christian Klien and Marco Seefried now just two points off the top.

Victory at Circuit Paul Ricard moves Duncan Cameron and Matt Griffin into the Pro-Am lead, but it is a tight battle. The #42 Strakka trio of Nick Leventis, Chris Buncombe and Lewis Williamson are just seven points back, while the #31 Team Parker Racing crew are a further three points in arrears.

The #6 Black Falcon crew of Abdulaziz Al Faisal, Gabriele Piana and Hubert Haupt lead the Silver Cup standings, with runner-up spot for their Mercedes-AMG at Circuit Paul Ricard coming on the back of victory at Silverstone.

Finally, the #89 AKKA crew of Fabien Barthez, Eric Debard and Philippe Giauque still lead the Am Cup standings, despite the #188 Garage 59 McLaren scoring back-to-back wins. The French squad lead by just three points in what already looks like becoming a two-way battle between Mercedes-AMG and McLaren.

The attention of the Endurance Cup drivers and teams will turn now to the 70th edition of the Total 24 Hours of Spa. The official test day is scheduled for July 3rd, while the main event will take place on 26-29 July at the legendary Belgian venue.