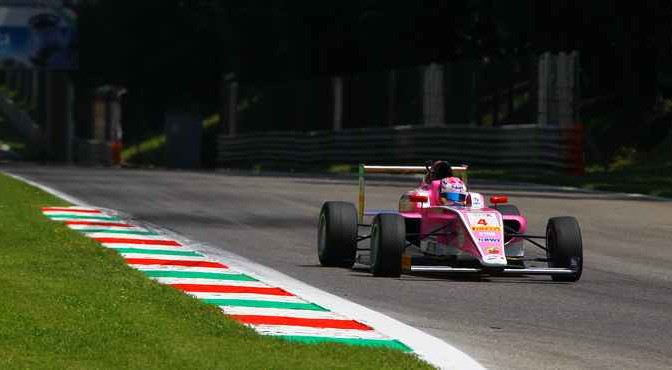 Fourth race weekend in the Formula 4 Italian Championship for Niklas Krütten at Monza. The BWT Mücke Motorsport driver battled again for first-class finishes at the historic circuit in Lombardy. The 15-year-old turned in an impressive performance with P10 in the first race and P7 in Race 3, which enabled him to secure his third and fourth Rookie podiums. He looked like achieving another top result in the second race, as he was in a promising position, but the second race at the Autodromo Nazionale Monza was stopped before the end following a crash.

The 15-year-old’s learning curve continues on its steep upward trajectory. Despite being at a slight disadvantage as regards speed when compared to the competition, Krütten’s qualifying was perfect with grid position ten and eleven for the first two races. In Race 1, the BWT Mücke Motorsport driver kept a cool head after he’d been impeded by another driver, which cost him time and several positions. But Krütten is really impressive in race trim with a high turn of speed, plenty of great overtaking manoeuvres and a low error rate. And that’s exactly what saw him through in the first race as he impressively fought his way back to tenth place. His reward, his third Rookie podium in the Italian Formula 4 as third-best rookie.

German driver Krütten did even better in the last race. He started from 18th on the grid and put on a real display of fireworks in the 30 minutes or so of the race. Despite an injury to his hand sustained in an accident in Race 2, he clawed his way forwards, winning position after position. He once again showed a keen sense of timing, pulling off some really great overtaking manoeuvres. He took the chequered flag in a strong P7 and also achieved second place in the Rookie stakes.

Racing will continue in the ADAC Formula 4 this weekend for Krütten when he contests races ten, eleven and twelve in the German formula racing series for juniors on the Red Bull Ring (8th – 10th June).

Niklas, you launched a charge up the field from 18th on the grid to P7. Well done!
Thanks. I’m obviously very pleased with the charge I went on. I had some really great battles during the race and enjoyed taking my opponents by surprise with an overtaking manoeuvre or two. The Italian Formula 4 is a very hard-fought series with a lot of top drivers. You’ve to go for it at Monza and show some courage if you want to overtake the guy in front. I managed to do that very well. There were important championship points for seventh place, and I’m always keen to secure another Rookie podium.

How would you sum up the rest of your weekend?
Apart from going on a charge in the last race and the two rookie podiums, which I’m obviously very pleased about, it was a tough weekend for us. We were lacking speed a bit on the long straights, which is why we had to cover our backs all the time rather than try to exert pressure up front. Still, I have plenty of positive memories from the weekend. There was something almost magical about driving for the first time around the track, on which great drivers like Juan Manuel Fangio once competed. The circuit is a real classic with lots of bumps and gravel traps. I’m already really looking forward to my next time out there.

Next up is the track that you’ve always said is your favourite. How do you expect to do at the Red Bull Ring?
The circuit is just incredible. You really get the feeling that you’re riding a roller-coaster as you take the differences in altitude at top speed. The circuit is also extremely fluid and the atmosphere with the background of the Alps is unique. I’ve already done some testing there and managed to do quite well. There’s nothing to prevent me continuing my fight for the top spot in the German Formula 4 Rookie classification.