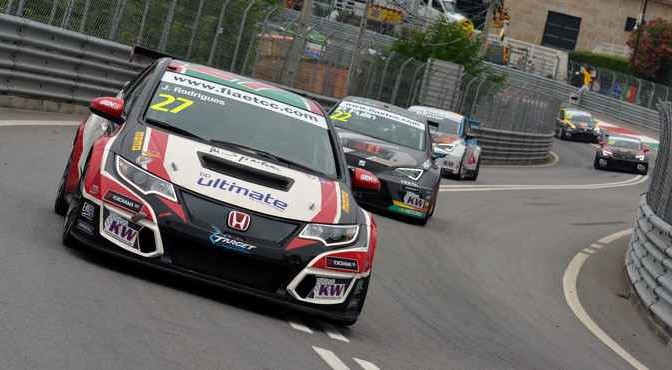 José Rodrigues has been confirmed as the second wildcard for FIA WTCR Race of Portugal: a huge opportunity for the 28-year-old rising talent to showcase his skills on an international stage.

Based in nearby Braga, Rodrigues is no stranger to the challenging Vila Real street track, which hosts Portugal’s rounds of the WTCR – FIA World Touring Car Cup presented by OSCARO from 22-24 June.

He was a Vila Real winner in 2016 and claimed a podium finish when he made a one-off appearance in the FIA European Touring Car Cup last season.

“I’m glad to announce that I will participate in the WTCR in Vila Real,” said Rodrigues. “Since I was a child, it was a dream to race in an FIA world-level event so I’m really proud. It is the result of many years of effort and also the passion of those who have always supported me.”

Rodrigues is part of Tiago Monteiro’s Skywalker Management company and has been quick to recognise the support he gets from his country’s best touring car driver.

“During the weekend I will try to put in practice all I have learned so I can compete with the world’s best racers,” said Rodrigues. “Tiago is one of the best in the world and with his help I will try to improve session by session so a special thanks to him, Skywalker Management and my family.”

While Rodrigues, who will drive for Target Competition, is new to WTCR OSCARO, he’s familiar with the TCR cars used in the all-action series having raced in Germany and Portugal previously. And he claimed a TCR Italy podium when the series visited Paul Ricard in France earlier this year.

“Being in my own country and with our people is an excellent opportunity,” he said. “I have achieved a lot of good results at Vila Real so it will be interesting to fight on the WTCR OSCARO grid.”

A maximum of two wildcards per event are being given the opportunity to race in WTCR OSCARO in 2018. Championship promoter Eurosport Events, in conjunction with motorsport’s world governing body, the FIA, will select candidates based on performances at national level, their potential as future full-time WTCR drivers or if their participation has the possibility to attract additional interest from fans and media. Edgar Florindo’s wildcard entry for WTCR Race of Portugal was announced live on Vila Real’s Facebook page on 23 May.