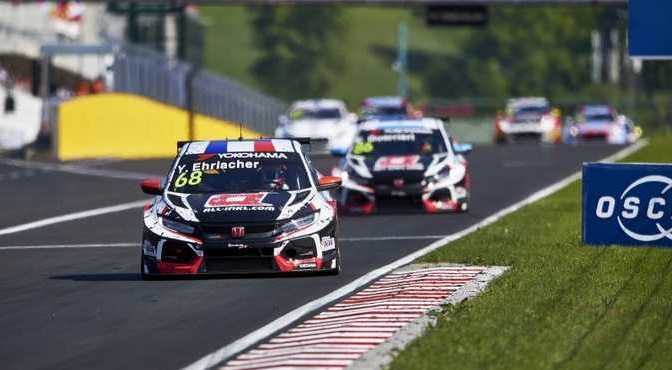 Frenchman Yann Ehrlacher led home his ALL-INKL.COM Münnich Motorsport team-mate Esteban Guerrieri to an historic result for the German team, who recorded not only the first WTCR victory for the Honda Civic Type R TCR, but also their first one-two in World Touring Car racing.

From second on the grid, Esteban led into the first corner, but suffered contact through the next two corners, which opened a gap for Frenchman Yann to snatch the lead. The pair drove in formation for the rest of the 12-lap race and finished together.

Benjamin Lessennes qualified a magnificent fifth in his Boutsen Ginion Racing Honda, but was cruelly dropped to 10th on the grid for not slowing down quickly enough during a full-course caution period during the session.

The Belgian finished 10th on the road, but a post-race penalty for contact with Münnich’s James Thompson late in the race, dropped him to 14th. Thompson finished 12th.

Lessennes’ team-mate Tom Coronel qualified 12th, but his race was short. The Dutchman suffered rising oil temperatures and a hard hit on the second lap and retired in the pits soon after.

Tenth place in FP2 was an indication of the pace of HELL ENERGY Racing Team with KCMG driver Attila Tassi, but three qualifying laps, which were disallowed for track-limit infringements, limited him to 21st on the grid. He finished 19th.

“I can’t even describe how good this feels. My first win for Münnich, the first win in WTCR for the new Honda and a one-two for the team. It doesn’t get better than this. I made a good start and when I saw Esteban and the others go wide at Turn 2, I just went for it. The car was brilliant and although there was pressure from Esteban from behind me, I know he’s not the kind of driver that is going to try anything silly. Thank you to the team for giving me a fantastic car.”
- ALL-INKL.COM Münnich Motorsport

“This is a very positive result for me and for the team after a challenging time in Morocco. We ran quite a small wing level for the race and so I overshot Turn 1 a bit and that gave Norbert Michelisz and Gabriele Tarquini a run on me. I was on the dirty part of the track coming into Turn 2 so we all went wide and Yann went through, but I made it into second and from there my race was simple; sit behind Yann and try to capitalise if he makes a mistake. He didn’t and a one-two is an incredible result for the team.”
- ALL-INKL.COM Münnich Motorsport

“Today’s been a bit of a mixed bag. The pace in both free practice sessions was very good and I was either ahead of or right behind Yann and Esteban, but through qualifying and the race we’ve just gradually lost a bit of speed and it’s not easy to see where. I lost a points finish when I was hit towards the end at Turn 1 and dropped some places, but the touch was quite light and it didn’t damage the car significantly.”
- ALL-INKL.COM Münnich Motorsport

“Pace-wise I’m happy with what I’ve shown today. To be fifth in qualifying on my first time here was good and if I’d started there I think I could have scored a very strong result. Unfortunately, I had a penalty during the full-course-caution in qualifying so I started a bit further back, and when you’re in the pack, you always have to fight hard. I think I need to learn a bit more about the best way to fight in the pack in WTCR against the more experienced guys, but speed-wise, I’m pretty happy and I’m aiming to repeat this speed tomorrow.”
- Boutsen Ginion Racing

“Qualifying was pretty good and from 12th, I definitely felt I could move forwards in the race. The first lap was a bit bruising and I had some contact with at least two cars. Then on the second lap I had a warning light come up on my dashboard to signal a rising oil temperature, and while I was looking at that I was hit very hard at Turn 9. At that point I just turned the engine off because it’s more sensible to save the car for the two races tomorrow and look for points.”
- Boutsen Ginion Racing

“It was a tough race, but I’ve definitely learnt a lot today. We showed in FP2 that we could set top-10 pace over one lap, but unfortunately, I lost my best times in qualifying on new tyres to track-limit penalties. I started back in the pack in P21, and from there it’s usually very difficult to make progress because the battles are very hard. But I finished ahead of where I started and I can take this into tomorrow where I have two chances to do much better.”
- HELL ENERGY Racing Team with KCMG

“I’m very happy with today’s result. The Hungaroring was where we took our first World Touring Car win and today it’s our first one-two finish and the first win in WTCR for the new Honda, so it’s a really great feeling. The team has done an incredible job to get us into this position since Marrakech and they’ve all worked so hard, so this is a great reward for them. Both Yann and Esteban were fast and sensible today. I’m sorry for James because three cars in the top 10 would have been even better, but he’s shown good speed too today.”
- ALL-INKL.COM Münnich Motorsport

“Our speed has been good, but our results have sadly not matched this. Benjamin was superb to qualify fifth and to set the third-fastest lap of the race, but unfortunately, we haven’t quite had the luck. Full-course cautions in qualifying are brand-new to Benjamin, so it’s unfortunate he was caught out and penalised. Tom was unlucky too to have his issues in the race. The positive is that we’ve proven we’re fast and if we can replicate this tomorrow, we will score some good points in the races.”
- Boutsen Ginion Racing

“Today’s been a good experience, even if we weren’t able to show Attila’s FP2 pace in qualifying and the race. He wasn’t completely comfortable in the car, but he’s getting more towards where he wants it and tomorrow, if we can string everything together, I’m sure we can be much higher up the rankings. Tomorrow’s target is to make the top-12 in qualifying, whereas the bigger priority is to make sure we’re all familiar with each other and working well together in time for the start of TCR Europe next weekend.”
- HELL ENERGY Racing Team with KCMG

“I’m delighted to see the Honda Civic Type R TCR not only win, but take a one-two finish. The ALL-INKL.COM Münnich Motorsport team have done a fantastic job today to achieve this dominant performance and both Yann and Esteban drove brilliantly. It’s also great to see Benjamin Lessennes score his first point in WTCR, although it’s a shame he had the grid penalty, because if he’d started where he qualified in fifth, he could maybe have even been on the podium.”
- JAS Motorsport