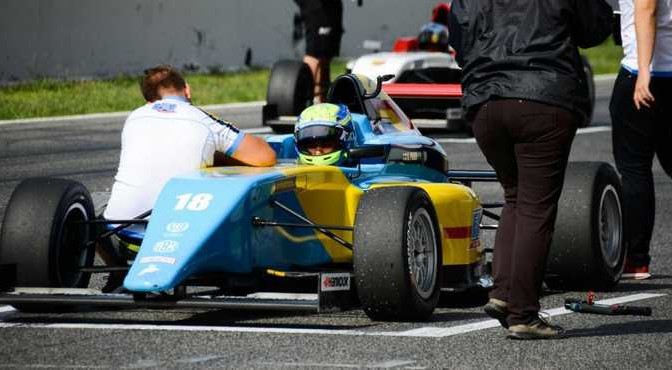 The Figueres native driver will contest the Round 1 of the 2018 Spanish F4 Championship in Alcañiz. Pujeu, who led the way for FA Racing Team in the collective preseason testing at Motorland Aragón, is looking forward to starting the season in style

Countdown underway to the start of Guillem Pujeu’s F4 Spain campaign. Motorland Aragón will host the season opener of the Spanish Formula 4 Championship in which Pujeu will repeat at the wheel of a FA Racing Team-run Tatuus-Abarth. With a season’s experience of Formula 4-based racing under his belt and after a positive winter testing, Pujeu feels optimistic to become a genuine podium force throughout the year. The F4 Spain Championship will have a high-profile entry list with a good number of rising talents coming from all around Europe.

“I’m looking forward to start racing because we put huge enthusiasm, effort and dedication for 2018. Our last season was quite positive, because I gained the top spot of the podium on my debut in single-seater racing. But, with more experience in the series and considering how well we worked in preseason testing, we have to set more ambitious goals for the season ahead”, Pujeu explains. The driver of FA Racing is still aware that “anyway it’s going to be a tough year as we will have extremely strong rivals such as Isac Blomqvist. We know Blomqvist will be immediately quick in the series as he is currently leading the SMP F4 in Northern Europe. At the same time, FA Racing Team and I have a solid package and we will try our best to make them life hard! I really like Motorland Aragón. The circuit layout is challenging and quick. I posted the fastest lap time in preseason there so I feel confident heading into the season opener.”