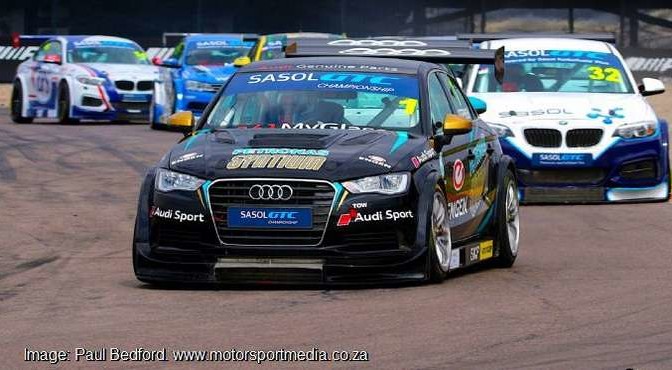 Clear weather, that clouded a little through a crisp Pretoria autumn’s afternoon, set the backdrop for a most entertaining afternoon of national championship Extreme Festival racing at the Zwartkops Raceway on Saturday. In a meeting set apart by record lap times, Michael Stephen and Daniel Rowe shared GTC wins and Bradley Liebenberg and Keagan Masters swapped GTC2 victories, but for the rest, Tasmin Pepper made the Polo Cup her own, Nicholas van Weely turned Formula 1600 on its head and Charl Arangies took both Extreme Supercars races in the national classes.

Engen Audi duo Michael Stephen and Simon Moss made their Sasol GTC intentions clear in qualifying, when Stephen turned in the fastest ever GTC lap around the Pretoria track in a time of 1 minute 1.889 seconds to snatch pole from his teammate by all of a tenth of a second. Sasol BMW duo Gennaro Bonafede and Robert Wolk were next up from top privateer Michael van Rooyen’s RCS BMW, while Keagan Masters put his Volkswagen Motorsport Golf GTi on GTC2 pole from Bradley Liebenberg’s Ferodo Mini and an impressive Dayne Angel and his Autohaus Angel Honda.

Stephen led his teammate away and set a new Zwartkops GTC lap record of 1m03.235s as he led from lights to flag, with Moss holding station to finish a second adrift his teammate and a similar gap ahead of third man Bonafede. Wolk was some way adrift as he kept van Rooyen behind, while Johan Fourie’s EPS BMW ran into trouble after 8 laps and toured home some distance back with the GTC2 mob snapping at his heels. VW duo, Mathew Hodges stopped on the last lap and Daniel Rowe nursed his troubled Jetta home a lap down. That put Rowe on pole for race 2, which he converted to a second race win in two races, over Bonafede, who kept Stephen behind for second as those two rose back through the field, with Moss fourth from Wolk and van Rooyen.

The GTC2s however put on a show to remember as Liebenberg beat Masters to a 0.3 second race 1 win after an entertaining dice up front. They avoided being lapped, while third-place Charl Smalberger (Sabretek Golf GTI) and the rest of the GTC2 field comprising Devin Robertson’s Mini, Trevor Bland and Adrian Wood’s Golfs, the Angel Honda and Bob Neill’s Focus were passed by overall winner Stephen to all finish a lap down. Masters turned the tables to stage another come from behind race 2 win over Robertson and Liebenberg, with Dayne Angel a fine fourth from Bland, Wood and Smalberger.

If Michael Stephen’s GTC qualifying pace was impressive, then Charl Arangies’ Pirelli Aston Martin was mesmerising as he clocked a 59.743 lap to claim the G&H Transport Extreme Supercars pole by a second from Tato Carello’s Daytona/McLaren SA 650 GT, with Paarl driver Charl Joubert’s Lotus-Honda a close third. Arangies and the Aston Martin then made off, setting a few 59 second laps to establish a 15-second lead by the flag and take an easy win over the duelling Joubert and Carello. Dawie Olivier was fourth in the G&H Transport Baby Beemer from Mark du Toit and Jonathan du Toit’s Trans Africa Ferrari F430, while Darren Winterboer and David Coetzee’s BMWs took Classes B and C. Arangies similarly dominated race 2 over Carello with Dawie Olivier third from Jonathan du Toit after Joubert did not start, while Winterboer and Coetzee took the classes again.

Teams worked hard to have cars damaged in the first race ready for the second, with one of them, Wilken on pole position and Bezuidenhout fifth out of the hat, but Wilken faded and Bezuidenhout’s car was not ready in time, while Kruger was later excluded from race 1 for his involvement in that incident. That left Pepper to romp off to another win from Kruger, Justin ahead of Darren Oates this time, an impressive Delon Thompson and Paulus Franken, both scoring their best Polo finishes yet, while la Reservee, Mogotsi, Keegan Campos and Duminy closed off the top ten.

Alex Gillespie (ERP Trucking) took pole for the opening Investchem Formula 1600 in the absence of Stuart White and Cameron O’Connor who were both on international duty, with Liam Pienaar (Fantastic Racing) second from Nicholas van Weely (Magnificent Paints). Van Weely was a doubtful starter after suffering a pre-race hand injury, but he made the best start to lead from lights to flag. Pienaar, Gillespie and Andrew Schofield (Investchem) were next up from Harmen van Beek (Fantastic) and the impressive Scott Temple in sixth after fighting from the back, while Ian Schofield took Class B in 8th. Van Weely went on to make it a double for the day, once again from Pienaar, Gillespie and Schofield, with class B winner David Jermy sixth from Temple.