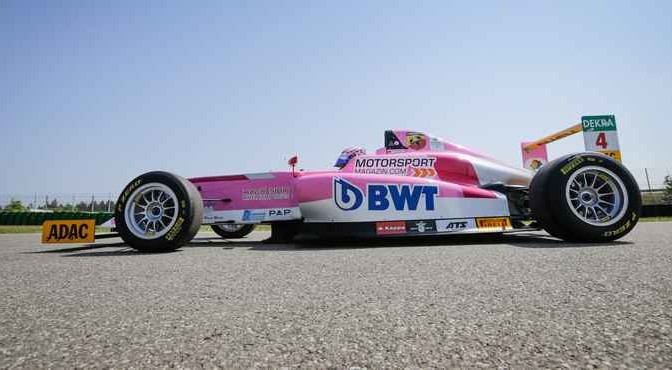 P2 in third race: Maiden podium in ADAC Formula 4 for Niklas Krütten
Rookie leader: BWT Mücke Motorsport driver Krütten retains lead in Junior classification
Niklas: “I realised in the first race that I’ve got what it takes to finish on the podium”

What a superb start to his Formula 4 career – 15-year-old Niklas Krütten showed just how ambitious he is with fifth place in the last race of the ADAC Formula 4 season opener at Oschersleben and now three weeks later, he produced a fantastic performance to earn a well-deserved place on the podium. What a fantastic weekend for Krütten and Team BWT Mücke Motorsport with his second place in the third race, the win and lead in the Rookie classification.

Krütten showed a strong pace on the day early on in first practice. The 15-year-old posted the seventh-fastest time in qualifying for the first race, putting him in an excellent position for a successful weekend, but he was brought down to earth with a bump in the first race, forced to retire in the opening rounds following a no-fault contact with a fellow competitor. Still, he made amends in the second race, crossing the finish line in eighth place after some tough scraps and an incredible final charge as he headed for the line. The reverse grid for the third race meant pole position for the BWT Mücke Motorsport driver.

Krütten pulled out all the stops in the last race, demonstrating his talent and showing just how much he has learned in such a short time in formula racing. He took the pressure in his stride and maintained the lead with an impeccable start. Another driver behind him used slipstreaming to overtake, but Krütten did not let up and stayed within striking distance of him. In the end, the German driver secured P2 at the finish line, taking a six-point lead in the Rookie classification away with him from Hockenheim.

Krütten and his team will be contesting the second race weekend of the Formula 4 Italian Championship at Le Castellet’s Formula 1 circuit (11th – 13th May) before heading to the Lausitzring for the third ADAC Formula 4 race weekend (18th – 20th May).

Niklas, your maiden podium in the sixth race. You’re maintaining an excellent pace in your first ADAC Formula 4 season…
I knew in the first race that I’ve got what it takes to finish on the podium. The feeling is just amazing! I lined up in pole position and got a pretty good start. I maintained the lead in the early stages, but the guy behind snuck by me on the third lap. We set the pace over the entire race. I did everything I could but was unable to get close enough to mount an attack for the win.

This was your first time in pole position. Were you nervous?
Yes, just a little bit, as the camera was aimed directly at me and a lot of people were watching. But everything went as planned and I got away extremely well. Mick put a lot of pressure on me. I did everything I could to stay in the lead, but we didn’t have quite enough pace for the win. Still, after my retirement in the first race and eighth place in the second, I’m made up with P2. My maiden win is on its way, for sure!

What was it like racing as support to the DTM?
It was a really amazing experience. To see all the DTM drivers walking around the paddock and being close up next to them was very special. After all, they are where I would perhaps like to be. Two-time DTM Champion Timo Scheider presented me with my trophy on the podium, which was just fantastic.

You’ve got a very busy programme ahead of you with Hockenheim, Paul Ricard, and the Lausitzring back-to-back. Just how do you manage to juggle everything?
Yes, it’s quite a full programme, but that’s how I like it, because I learn something new with every race. Our test outings in Le Castellet were very promising. We were in the Top Ten in every session, so I’m hoping to do well. I’m already really looking forward to the next lot of wheel-to-wheel action in the Italian Formula 4.