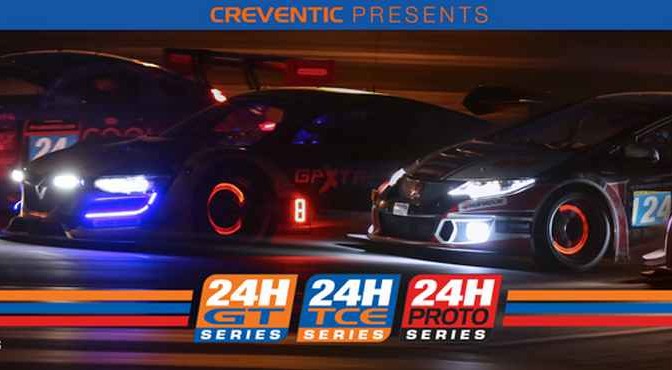 This November, Touring Car and GT teams are set to compete in the second annual Hankook 24H COTA USA, just a few days removed from the prototype-bespoke Hankook 3X3H COTA USA. Even more incredibly, interest is also high for next January’s Hankook 3X3H DUBAI and annual 24H DUBAI endurance events. Why such interest early on? Well…
Preliminary entry numbers for this year’s Hankook 24H COTA USA are already expected to surpass those accrued last year, more than half a year before the green flag drops in Austin, Texas.

More than 40 cars spanning 10 different nationalities and incorporating 174 different drivers representing 23 countries competed at CREVENTIC’s first-ever event at the Circuit of the Americas last November. Organisers are anticipating similarly impressive numbers for the 2018 edition of the race on 16-17-18 November, with 40 cars spanning nine different classes and 13 nationalities having already thrown their respective hats in the ring 212 days before the event is set to get underway.

​2018 Hankook 24H COTA USA (15-16-17-18 November)
Welcoming some of the most professional and competitive endurance racing teams from Europe and the United States alike, last year’s Hankook 24H COTA USA was heralded by many as a huge success for both CREVENTIC’s expanding portfolio and endurance motorsport in general, thanks to a frenetic fight for outright victory and tight racing throughout the field. The event also marked the series debut of Aston Martin as an official works entry, as well as that of its CEO, Andy Palmer.

Joining the acclaimed Hankook 24H DUBAI on the 24H SERIES calendar for the first time in 2017, the Circuit of the Americas helped establish the 24H SERIES powered by Hankook as an intercontinental pioneer for semi-professional, ‘gentlemen’ endurance racers across the globe. The home of the Formula 1 United States Grand Prix also ushered in CREVENTIC’s new Championship of the Continents, across which teams and drivers can fight for victories, podiums, and even championship honours in the Middle East (Dubai), Europe (Portimão) and the Americas (COTA). The Championship of the Continents will be contested once again in 2018, a factor that has also spiked interest in next year’s Hankook 24H DUBAI.

2019 Hankook 3X3H DUBAI (5-6 January) and 24H DUBAI (10-11-12 January)
Set to take place on 10-11-12 January in 2019, the 14th annual running of the Hankook 24H DUBAI is also set to be a star-studded event. This year’s season-opener produced another classic race – complete with its usual thrills and occasional spills – and is already expected to equal, if not surpass, the 91 cars entered this year, nine months before the race gets underway.

​What CREVENTIC and its partners can do for you
The gravitas of both the COTA USA and Dubai weekends not withstanding, help and assistance from CREVENTIC’s vastly experienced logistics team both before and during each race weekend has allowed countless competitors to race safely and with a fraction of the procedural headaches endemic to motorsport.

Transportation for instance is included within a team’s entry fee: entrants can simply load their cars and equipment into their 40ft container, and CREVENTIC’s in-house personnel will take care of the rest, including customs operations and paperwork. When teams arrive at the circuit, they’ll even find their containers, ready to be unloaded, behind their designated pit boxes.

The multi-tier class structure of every 24H SERIES weekend also ensures that if your car is eligible to race according to our comprehensive sporting and technical regulations, CREVENTIC will find a class for you to compete in.

Fuel and tyre demands are similarly catered to thanks to the diligence of 24H SERIES partners. Teams are never required to transport their own fuel rigs as a central fuel station is incorporated into every CREVENTIC event, a mandate that has considerably improved pit and paddock safety at 24H SERIES events. Hankook Tires meanwhile ensures that every competitors receives the tyre and compounds required to race (safely) at the limit, and that includes full tyre fitting too.

Dates and circuits
This year’s inaugural Hankook 3X3H COTA USA is set to take place on 15-16-17 November as the Hankook 24H COTA USA draws the curtain on the 2018 24H SERIES that same weekend on 16-17-18 November. Next year’s calendar meanwhile will get underway with the Hankook 3X3H DUBAI on 5-6 January, one week before the 14th annual Hankook 24H DUBAI on 10-11-12 January. As always, we hope teams, competitors and fans alike will join us to experience the thrill of endurance racing, CREVENTIC-style.