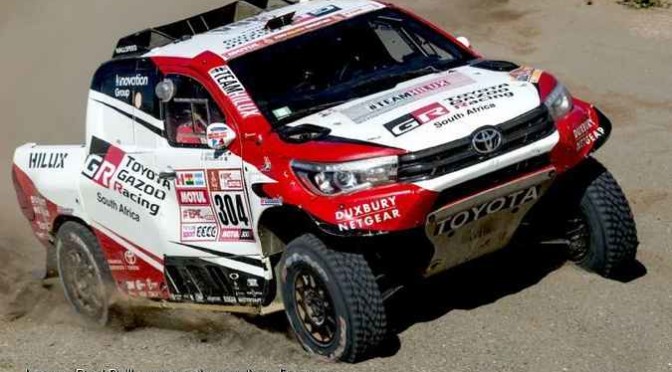 Another South African highlight were Dakar debutants, Hennie de Klerk and Gerhard Schutte surviving what is considered to be one of the toughest Dakars yet to clinch rookie honours in the car race in their TreasuryOne Amarok, while all seven South Africans who started Dakar 2017, finished the race.

Like Sainz, Austrian rider Mathias Walkner consolidated the motorcycle lead he had established earlier in the week to win his first and no less than KTM’s seventeenth Dakar on the trot, while Argentine Honda hero Kevin Benavides won the final stage to keep Toby Price’s KTM at bay to complete the bike podium.

Ignacio Casale rode his Yamaha to an untroubled quad win after opening up an early lead, before sitting back to watch his main rivals drop out one by won to take a second Dakar four-wheeler win from Argentine riders Cavagliasso and Gonzales. Brazil’s Varela was the best of the six side-by-side entries to finish in his Can Am. The truck battle came to a dramatic end on Friday’s cruel 13th stage, when Argentine hero Federico Villagra’s Iveco ground to a halt to leave Russia’s Edoard Nicolaev to wrap up another easy win for Kamaz.

Tough car race
The car race was a tough one with less than half of the starters making it to the finish in Cordoba. The Peugeots sandbagged on the first day to see Al Attiyah leading the way from rookie Menzies’ Mini, but the American driver crashed out early the next day as the Peugeots stormed to the fore as Cyril Despres led a Day Two 1-2-3. Al Attiyah bounced back to win day 3 from the four Peugeots, before Sebastien Loeb, Peterhansel and Sainz took turns to win the next three days, although Loeb retired with his navigator hurt on Day 6.

But Peterhansel lost two hours when he crashed heavily on day 7 and Despres stopped to lend him parts, leaving Sainz to take the day and a strong overall lead over Toyota duo Attiyah, Bernhard ten Brinke, Peterhansel and de Villiers. The Mini attack crumbled through all of this as its cars hit trouble and retired at an alarming rate, but Sainz was cruising home and Peterhansel charging back into second with two stage wins versus ten Brinke’ and Al Attiyah’s one apiece through the following week.

That left everything looking set for a criuse to the finish before Friday’s cruel 13th stage intervened – Peterhansel crashed again to fall behind the Toyotas and then ten Brinke’s engine packed up, leaving Sainz comfortably up front from Attiyah and de Villiers with Peterhansel looming large in his mirrors.

Sunderland set the initial pace, but crashed out early on to leave up a tight scrap for the lead before Soutrait crashed out on Tuesday. But it all went pear-shaped on Wednesday’s 11th day, when Barreda, Benavides, Price, Meo, Quintanilla, Brabec and several others got horribly lost to leave van Beveren and Walkner way out front. Van Beveren then crashed out that afternoon to leave Walkner all alone up front, well clear of Benavides Barreda, Price, Brabec and Meo.

Honda’s attack then faltered when Barreda succumbed to an earlier knee injury on Wednesday and Brabec’s bike came to a fiery halt on Friday’s penultimate stage, leaving Benavides to fight the orange KTM army alone. Walkner simply needed to ride it home to win KTM’s 16th straight Dakar bike win, while Brabec held Price off for second with Meo fourth from Spanish Dakar legend Gerard Farres Guell on another KTM while Frenchman Johnny Aubert was a surprise sixth for Gas Gas ahead to Quintanilla.

Proudly South African
But it was a great Dakar for its South African competitors – all seven of the men who started the race, finished it – some very much against the odds…

TreasuryOne CEO Hennie de Klerk had a dream to finish the Dakar at his first try. Five years ago he started cross country racing back home and last year he went out and built himself a Ford V8-powered Amarok he thought would best suit his needs. Then he won his Dakar entry fee and transport cots at the Toyota 1000 in June and teamed up with co-driver ‘MacGuyver’ Gerhard Schutte for the Dakar. Not only did they get to the finish, but the TreasuryOne duo won the coveted Dakar 2018 rookie race in an incredible display of pure Dakar spirit.

Giniel de Villiers had a tough Dakar, but the Stellenbosch Driver added yet another podium to his incredible Dakar pedigree. Giniel has finished 14 of the 15 Dakars he has started in the top ten (he was eleventh in the other one), ended third on three attempts, second in four and won in 2009. This year de Villiers lacked a little luck, but he and his Toyota South Africa team delivered yet another giant-killing performance to end up second and third behind the last remaining Peugeot rocketship as he held off the pressure from Mr. Dakar behind in another.

Ace navigator Robert Howie thought he would not race Dakar 2018 after his regular driver Leeroy Poulter opted to take a sabbatical for health reasons. But he received a late call from Argentine Lucio Alvares to read notes for the Argentine in his privateer Hilux. A few weeks later Rob has added another top finish to his growing Dakar repertoire.

A year ago David Thomas, the son of a former Cape enduro racer was on pain killers on his back, with his leg in plaster in a tacky Bolivian hospital as he endured the double pain of watching his rivals finishing the Dakar on live television after he had crashed out of with days to go. Thomas spent the past year recuperating and while he was not yet 100% fit, he rolled the dice to come back and try a second time to finish and he was overwhelmed to park his Husqvarna on the Dakar finishers podium to bring a life-long Dakar dream alive.

South African KTM rookies Willem du Toit and Donovan van de Langeberg both rode consistently and quickly throughout and also kept each other company most of the way as they consistently ended up close together in the motorcycle midfield throughout Dakar 2018. Donovan finished up 54th and Willem 58th overall as they both realised their dream of finishing the toughest race in the world.

Last man standing
Last and by no means at all least — and yes, that is a pun — the intrepid Gerry van der Byl quite literally evaded the hangman throughout the rally – he was the last man standing throughout as he ended up 85th overall among the bikes — a whole 80 hours (or three days and six hours! behind winner Walkner, including just over a day’s worth of penalties! But none of that matters — Gerry brought his KTM home late every night and clung on to last position overall on two wheels to stand on the Dakar finishers podium — an incredible achievement for an average Sunday rider…

In all 2018 delivered among the toughest Dakard that many wish to remember, but that all seven South Africans finished a race that tough is a tribute to each and every one of them – they have done their country more than proud…