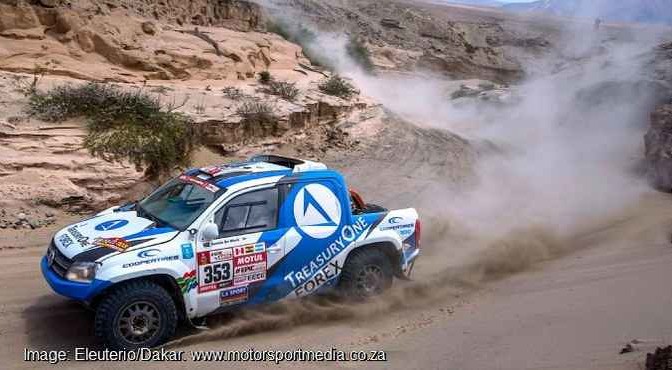 Tuesday’s fourth day was the most severe yet of what is turning out to be among the toughest Dakars yet, with leaders running into trouble and only 51 cars of the 75 that started having reached the finish of the stage by midnight local time in Peru last night (7am SA time). The TreasuryOne Amarok piloted by Brits-born Pretoria businessman Hennie de Klerk and Gerhard Schutte from Centurion was one of the finishers, but the tough final section that caught out so many, was also the one to test the South African privateers.

Hennie and Gerhard had enjoyed a consistent run through the day, running as high as 30th by the final waypoint, but they were among the many to be challenged to the limit in the treacherous soft sands of the final sector. “That was very tough!” an exhausted de Klerk admitted at the end of a dramatic nine hours in the saddle. “We have slipped a little in the overall results, but we are still in it.

“We raced 330 km of rock and mainly sandy terrain and up to kilometre 230, we were doing very well despite massive dunes to climb and very technical driving. “Then we got stuck in a hole for more than three hours before spending a lot of time looking for a very important waypoint.”From there it went from bad to worse – the brakes failed and the power steering pump got damaged so eventually we did the stage in 9 hours but we are still hanging in there!

“The result does not matter though — our objective is to finish. Yesterday’s stage really was an extreme challenge, lots of dunes again and more fast tracks and there was always a danger of getting it wrong, so mentally yesterday was tough. “The final sector was a huge test for us — both in terms of navigation and driving in the soft sand, but the important part is that we made it through. “Gerhard and I are taking it very cautiously — there is still a lot of racing left and we need to look after the car.”

Once again we need to thank our crew who are now working flat out on the car — mechanics Justin Allen, Patrick Samuels and Siboniso Wiseman Maseko (all from Johannesburg) and our T5 support truck driver Lionel Lewis (from Pretoria) — the treasuryOne Amarok took a bit of a beating today, so it’s their Dakar now to get it ready for an early start in the morning. “And of course for all the support from back home — we continue to be overwhelmed at the level of interest and goodwill from the fans — thanks so much to everyone for that!”

Wednesday’s stage from San Juan de Marcona to Arequipa will see Hennie and Gerhard setting off on an even longer 666km day, starting first thing in the morning with 268km of racing over the mountainous sands of Tanaka before a long drive to the bivouac in the foothills of the Andes. Catch the action as it happens on TreasuryOne’s live blog at www.motorsportmedia.co.za.