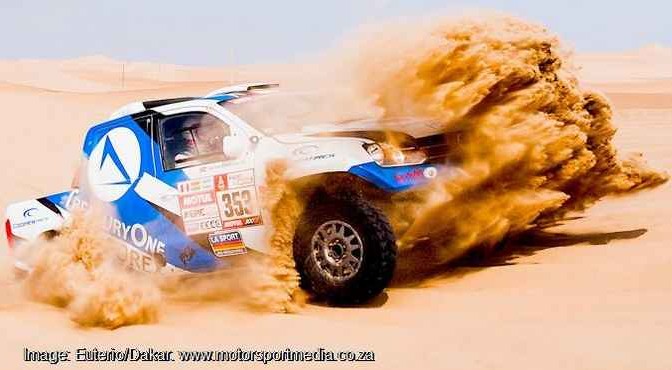 Hennie de Klerk and Gerhard Schutte kept their cool to emerge relatively untroubled from a testing third day of Dakar 2018. The duo started the day 32nd in the TreasuryOne Amarok following a meteoric rise through the field from 58th at the start on Day 2 and maintained position for most of the day, but the challenge of dune driving and navigation cost the duo a few places to see them end a provisional 42nd on the day and 32nd overall Monday evening.

“I think we’ve found our niche in the Dakar 2018 pecking order,” Hennie de Klerk admitted. “We are now racing against cars of more or less the same pace as our TreasuryOne Amarok, so there are a few people we are getting to know out there and who we think we’d like to beat, so the race is definitely on!

“Today went pretty well — we kept station for the first few checkpoints, passing frontrunners who had trouble and being passed by one or two quicker cars coming back through the pack, but the day got tougher as we went on and we lost a few places. “we also had to stop to help a few of our teammates and rivals who had problems and rolled and also pulled a few cars back onto their wheels over the past two days, but that’s all part of Dakar.

“Still, we had a good run — Rome was not built in a day and we still have to in essence travel halfway around the world to the finish in 11 days time, so we will just keep on pushing on at our pace – let’s see what that brings us!

“I’d once again like to thank all our supporters, some of them here in South America, but most of you who are following us over the social media on the TreasuryOne Motorsport Facebook page and everywhere else — we are truly humbled by the all the love and support and we are proud to be making it happen out there! “We’d also like to thank our team who are keeping the TreasuryOne Amarok in fine fettle to allow us to chase this dream.”

Tuesday’s fourth Dakar stage will see Hennie and Gerhard tackling a 444km loop around San Juan de Marcona starting with a 114km liaison section down to a beachside start before a 330km blast into and around the foothills of the Andes, peaking at 2km above sea level with a little less sand and a little more gravel and stone driving. Follow it all via TreasuryOne’s Live Blog at www.motorsportmedia.co.za.