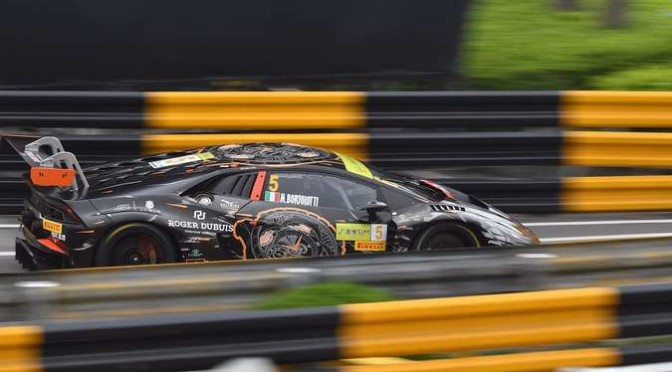 With factory Lamborghini status, FFF Racing were bullish expected a strong showing this weekend in the FIA GT World Cup and despite some minor setbacks, managed to secure top-ten finished with one of its Huracan GT3 entries in what was a troubled weekend.

The first practice session of the 63rd Macau Grand Prix weekend saw Mirko Bortolotti and teammate Andre Couto 11th and 16th fastest as they struggled to find the right balance and pace in their Roger Dubuis liveries Lamborghinis. The trend continued in second practice and into qualifying where they lined up 10th and 14th respectively following the Qualification race.

Having triumphed in GT Asia, the team approached race day with optimism and believed that they could work their way through the pack. Unfortunately, given the very nature of the 6.132km street circuit, opportunities in the race were almost non-existent thanks to incidents for others brining out red flags.

With just a handful of laps to make any progress, Bortolotti was able to make his way through to ninth position before the race was declared after just four laps, while Couto had to settle for 12th.

“It was a disappointing weekend in many ways,” declared FFF Racing Team Owner, Sean Fu Songyang. “We struggled for pace in practice and hoped we could move towards the front with Lamborghini in the race.

“However, the race itself never really got underway meaning we had little opportunity but I suppose that’s just the way in Macau. With so many people watching this event, we’re just disappointed not to have had a real chance to show our best – and the capabilities of our two drivers who effectively had no chance to shine.”