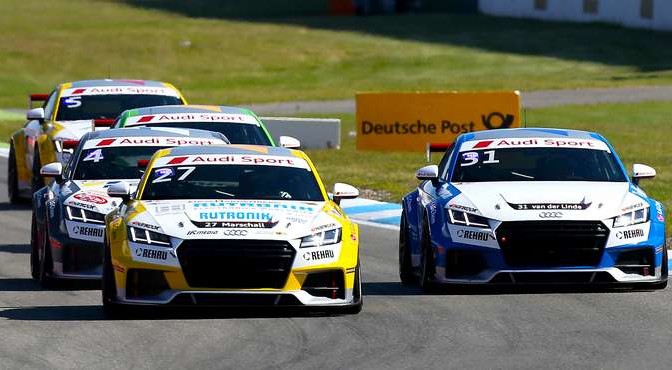 Sheldon van der Linde ended his Audi Sport TT Cup rookie season on a positive note when he turned a difficult weekend around to come back fighting and score third and fourth places in the two races of the Hockenheimring finale as he ended up second in the Rookie championship and fourth overall for the year.

“Overall I enjoyed a great debut year,” Sheldon admitted. “We started very strong, but we were unlucky and I made a few mistakes through the season. “We won four races, had a few pole positions and fastest laps and I think we can be pretty proud of that.

“Congratulations to overall champion Joonas Lapalainen – he drove a consistent season and finished every race in the points, also well done to my main sparring partner Dennis Marschall who ended second in the championship and to Rookie champion Nicklas Nielsen – I never had an answer to him this weekend.

The Hockenheim weekend proved challenging for van der Linde from the outset, with qualifying running in cloudy and cold 7 degree conditions. “Qualifying was disappointing,” Sheldon conceded. “We decided to change the differential setting and camber angles of the wheels for the first race, which was awesome – I set the fastest lap on the way from ninth to third and got on the podium.

“That was not enough however – Nicklas finished second and moved into the Rookie lead. “I also progressed well early on in the second race but I ended up behind fourth behind Dennis, Nicklas and Joonas and could not get close enough to pass.

“As they say, what does not kill you makes you stronger and I learned so much this year,” young van der Linde concluded. “I truly appreciate everything that everyone has done for me and especially all the support from back home. “Now I’m looking forward to coming back stronger then ever next year – bring it on!”