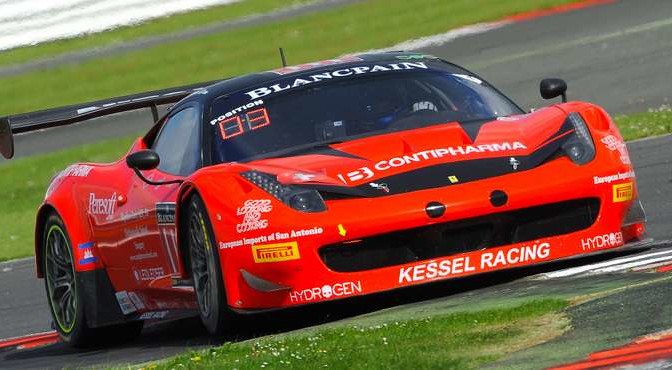 South Africa’s David Perel drove the Kessel Ferrari he shared with US teammate Stephen Earl to a dramatic maiden Blancpain GTAM victory in the second race of the series’ Hungarian Sprint race weekend in Budapest on Sunday. Perel and Earl had taken third in Saturday’s opening race, but David’s attacking drive to victory grabbed the Hungoraring headlines.

“We got the win!” a delighted Perel beamed after a forceful drive to victory as he passed the similar Rino Mastronardi and Claudio Sdanewitsch AF Corse Ferrari after setting the fastest first sector of any car in the race. “I got into a little trouble for my pass on the leader, but we kept the win and I’ll take it for sure!”

David’s return to the Blancpain series started with a difficult qualifying session. “It was a bit of a disaster,” the Capetonian explained, “I never managed one lap where I wasn’t blocked by another car, but that’s just the nature of this track, so be it.”

The first race went much better as Perel handed the car over to Earl after making good progress through the field, before succumbing to a track limits penalty, which dropped the duo to third, but it was still Perel’s first Blancpain podium.

“A podium is a podium — I’ll take it! with both hands” David admitted. “We were leading until the pitstop — unfortunately we incurred a drive through penalty for exceeding track limits, which killed any chance of a win, but I was into the top 20 before the stop. “It was great racing with the pros and battling with the winner of the Spa 24.”

Sunday’s main race was a great one for Perel, who took his first win in the series following a difficult start to the season. “We won ten thousand Euros for the team today’” David smiled. “We owe it to the team enough because of all our drive through penalties!

“I really love the Blancpain GT Sprint race format,” David concluded. “Our pace is there but our race craft needs some work. “I need to specially thank Ronnie Kessel, Giacomo Piccini and Alan MacDonald for all they have done to get me here — here’s to them and to many more days like this going forward!”