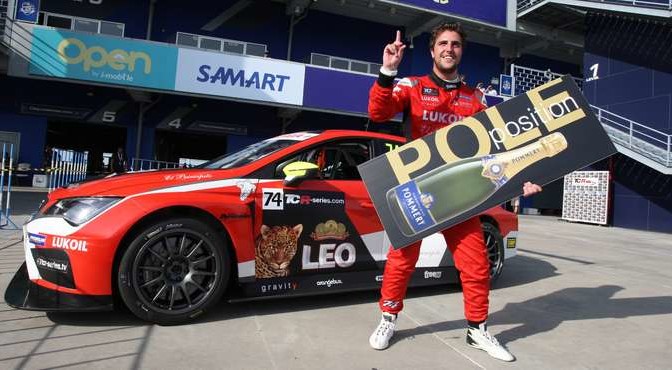 In the closest Qualifying from the beginning of the season Pepe Oriola claimed his first pole position of the year beating Gianni Morbidelli by only one thousandth of a second.

It was also a very rewarding recognition for the Craft-Bamboo Lukoil team that had worked very hard since yesterday to rebuild James Nash’s car after the shunt in testing and to solve a technical issue on Sergey Afanasyev’s. On top of this, the five points awarded for the pole position enabled Oriola to re-take the championship lead by two points ahead of Stefano Comini.

The Qualifying results proved that competition is very close on the track – with the six fastest drivers in Q2 covered by three tenths. Meaning that two exciting races should be expected for tomorrow.

There will be an all-Russian front row on the reverse grid for Race 2, with Mikhail Grachev on pole and Afanasyev alongside him.

It was an extremely close Q1, with the first 13 drivers covered only by six tenths of a second. Kantadhee Kusiri was the only Thai driver to advance to Q2 (8th fastest – 1:44.488), while Petr Fulín provided the final thrill by posting the 10th fastest lap (1:44.532) and kicking Davit Kajaia (whose car suffered from a broken drive-shaft) off the top-twelve in the process. Kajaia’s teammate Munkong Sathienthirakul missed the whole session due to a gearbox failure.

Q2: Oriola on pole for the first time

Pepe Oriola won his first pole of the season with a perfect lap of 1:43.634 that was only one thousandths of a second faster than Gianni Morbidelli’s 1:43.635.

On his second attempt, Morbidelli jumped on top again with a lap of 1:44.733, but Oriola managed to go faster (1:44.634) and Morbidelli’s last lap (1:44.635) was only 0.001 seconds slower. Kantadhee Kusiri continued in his impressive effort and qualified in eighth, while Petr Fulín could not post any lap time due to an electrical issue.

Pepe Oriola (pole position): “I am really happy with this pole that I didn’t expect at all. After free practice and Q1, I could never expect to beat Gianni, but I did, despite having to abort my first attempt because of traffic. Then, I found myself alone and I really enjoyed that clear lap. I know that it’s when you enjoy driving that you are faster, but still, I didn’t expect that to be the pole, the first this season. The points attached to it allowed me to retake the lead in the standings, but that doesn’t mean anything, we still have eight races to go, and I won’t think about that until Macau.”

Gianni Morbidelli (second fastest): “I did my best and it was a great effort by the entire team to work on the set-up of the car during these two days. It worked well. I missed the pole by one thousandth of a second, which is nothing, some millimetres, but the most important is that the car goes well. When I did my fastest time, I had already three laps in my tyres, which showed that the balance was good. Tomorrow, the biggest problem will be managing the effects of extreme heat…”

Jean-Karl Vernay (third fastest): “We are all very close, which proved how competitive and balanced the level of the series is. I was not very confident about the set-up after free practices, but then, analysing the data, we discovered that the problem was probably… me. I tried to calm down and have a cooler approach, and it worked. It’s my first time on this track and I really like it a lot.”

Kanthadee Kusiri (eighth fastest): “It was an excellent result for me and I thank the team that gave me a perfect car and helped a lot in working on the set-up. It’s my first race with a TCR car and it is very different from F.3, there are a lot of things to learn in a very short time. Tomorrow it won’t be easy but I’ll go for it and push as hard as I can.”

TCR Thailand joins the International Series for a family photo

The tradition of taking TCR family pictures was carried on today at Buriram’s Chang International Circuit, where cars and drivers of the TCR International Series and TCR Thailand were lined up all together on the track for the photo call.

TCR promoter Marcello Lotti also joined the picture, together with the circuit’s managing director Tanaisiri Chanvitayarom and Paritat Bulbon, the promoter (but also a competitor) of TCR Thailand.

Motorsports and football are closely linked at Buriram, as the Chang International Circuit is next door to the I-Mobile Stadium, the home of Buriram United, one of the top teams in Thailand’s Premier League. Friday evening, an unusual match took place between TCR drivers and the Buriram United Academy, the junior team of local heroes.

The two sides played an intense match of two 15-minute half-times, which started with some difficulty for the TCR drivers, down by 3-0 after only six minutes… Progressively, though, the car aces reduced the gap, as they became more involved into the action and improved team effort. While Mikhail Grachev and Davit Kajaia, among others, showed excellent game vision, Jean-Karl Vernay and Du šan Borkovi ć impressed with technical skills.

The TCR squad reduced the disadvantage to 4-3, with goals of Borkovi ć and Marc Masip (Pepe Oriola’s personal trainer who scored twice), before Vernay tied the score in the dying seconds of the match.

The draw led to a penalty shoot-out that Buriram United young guns won 8-6. A truly honourable defeat for the four-wheel guys, which was followed with enthusiasm by the TCR and Buriram United communities, led by TCR promoter Marcello Lotti and Buriram United President Newin Chidchob . One of the top stars of Buriram United first team, Andrés Túñez, a former player of Venezuela national team, also attended and lent his savoir-faire to TCR drivers for a few minutes.

Tomorrow it will be possible to follow three TCR races in live streaming on www.tcr-series.tv.