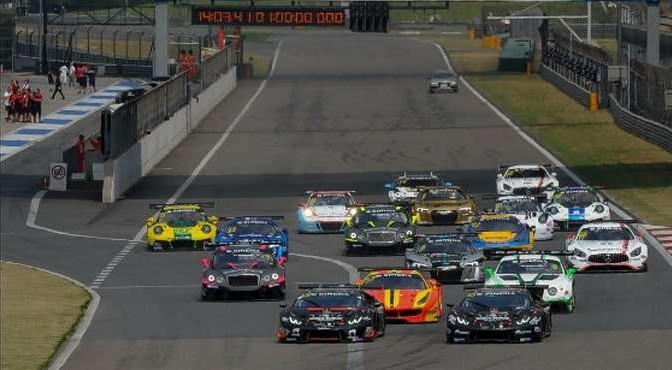 In what has been hailed as a fine team display, FFF Racing preserved its championship lead by battling to a podium finish with Edoardo Liberati and Andrea Amici in the penultimate round of the 2016 GT Asia Series at the Shanghai International Circuit in China (20-21 August).

Both FFF Racing Lamborghinis ran competitively during a day of testing at the Formula 1 Chinese Grand Prix venue, therefore the Roger Dubuis-supported team was in good shape entering the first of two qualifying sessions on Saturday (20 August) morning.

However, clear, unimpeded laps were at a premium in Q1 and neither the #55 entry of Liberati and Amici nor the #15 of Jeroen Mul and Richard Antinucci were able to realise their full potential, qualifying out of position in seventh and tenth respectively and notably behind FFF Racing’s chief title rivals, Davide Rizzo and Anthony Liu Xu.

Incredibly, GT Asia debutants Mul and Antinucci charged up the leaderboard to threaten for a podium finish prior to the compulsory pit stops, only to suffer a race-ending tyre delamination as a consequence of a punt from the Craft-Bamboo Porsche of Richard Lyons.

FFF Racing regulars Liberati and Amici also made headway, but their charge was stymied by a heavy success penalty and the #55 Lamborghini Huracan could be found in the lower reaches of the field after the stops at around mid-distance.

It was up to Amici to recover lost ground and a big push saw the super-quick Italian climb from eighth to fifth during the final three laps alone in what was a superb damage limitation exercise.

Points for a top five finish were gratefully received; Liberati and Amici were now tied for the championship lead with race winners Rizzo and Liu, therefore the outcome of Sunday’s (21 August) contest would be critical in determining who held the initiative ahead of the highly anticipated season finale.

FFF Racing made its intentions clear in Q2, as Mul shook the established runners by grabbing pole position and Amici qualified second ahead of the title-rivalling Ferrari 458 Italia, which loomed as an immediate threat in third.

The scene was set. Solid starts meant Mul led Amici for the first two laps, but positions were eventually traded and the #55 Lamborghini was released into clean air, which Amici used to carve out a ten-second lead before the pit stop window.

Another success penalty and a slight delay in the pits were inconvenient and Liberati had it all to do in the latter half of the race to ensure he and Amici retained the lead in the overall Drivers’ Championship and the Drivers’ Pro Cup.

However, the Lamborghini factory driver showed his class by battling to second position, driving away from title foes Rizzo and Liu who fell back to tenth, to secure a nine-point lead entering the final round of the 2016 GT Asia Series at the Zhejiang Circuit in China.

FFF Racing Team Owner, Sean Fu Songyang, said: “This was a fantastic team effort and a great success for the entire FFF Racing programme. Running two cars, putting the second car on pole for race two and taking away a podium result at such a critical point of the season is fantastic. Sixth place for the #15 Lamborghini of Jeroen (Mul) and Richard (Antinucci) completes an impressive team display.”