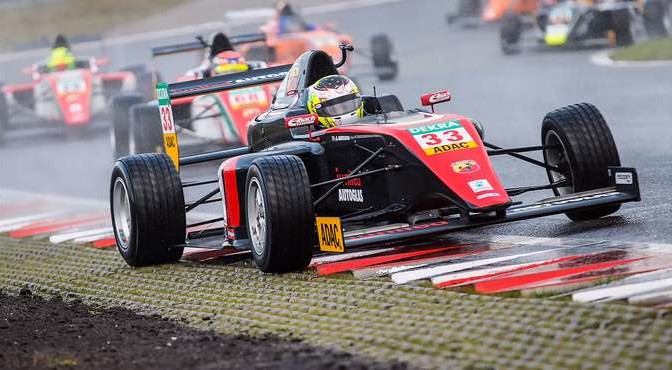 South Africa’s German ADAC Formula 4 rookie Jonathan Aberdein enjoyed a brilliant outing in Holland, scoring a triple top-ten over the Zandvoort race weekend as he climbed onto the podium for the first time with a brilliant second in the shortened second race.

“I am delighted and frustrated all at the same time,” Jonathan admitted. “Second is my best result and my first ADAC German F4 podium, but I was in with a real chance to win today, a pity the race was shortened,” The final race was called to a premature close when chaos broke out behind Aberdein and a multiple pile-up blocked the track. “I was very quick in the rain, but second is good though.”

The Final was however only the cherry on top of a great weekend for young Aberdein, who delivered a terrific drive in race 1. “I started 11th finished seventh even if it’s very difficult to pass here.” Jonathan’s progress was typified by an incredible move around the outside of the daunting Tarzan hairpin to move into that seventh position.

The second race was a little more difficult with Jono ending up on the wrong end of a tenth of a second gap that covered most of the top 20, but he drove an inspiring race to move up to 10th from 14th on the grid to set up his first triple-top-ten weekend of the year. “Today was a good day with two top tens. “Bring on tomorrow.”

Sunday dawned wet, which meant that Aberdein was unable to use the best tyres he had saved for the Final, but he still drove a brilliant race that was red flagged twice. “Conditions were tough in the pouring rain, but I nailed Drokovic on the outside between turn 3 and 4 and I was biding my time when they stopped the race for good even though there were 12 laps left to run.”

“Still I am delighted – we are getting it right at the end of my rookie year,” Jonathan concluded. The weekend’s results saw Jonathan scaling well up both the rookie and overall championship tables with one race left to run. “Now I have my podium, let’s try get that first win at the last race of the season at Hockenheim 30 September – 1 October.”