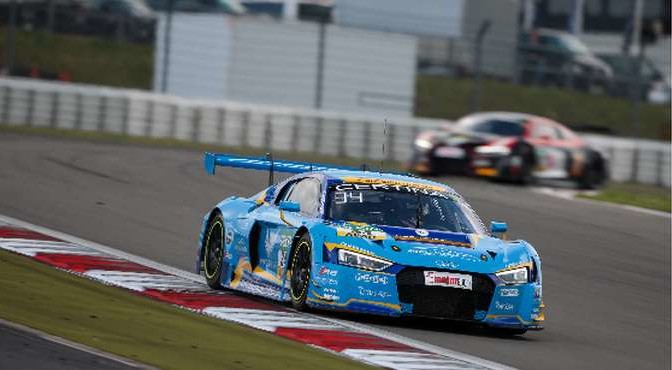 A malfunctioning differential of his Car Collection Motorsport-entered Audi R8 LMS prevented Tutumlu from improving 29th on the starting grid. Later in the race, Tutumlu gained eleven places before handing over the car to van der Linde, who took the checkered flag in 12th in race 1 at Nürburgring.

It was not a good start to the weekend for Spain´s Isaac Tutumlu after hitting differential problems in qualifying early in the morning. After two productive free practice sessions on Friday, Tutumlu has taken qualifying duties in Q1 at the wheel of the Car Collection Motorsport Audi R8 LMS but his problems made impossible to improve 29th on the starting grid with a best lap of 1:29.099. The German team made the best effort to fix problems for race one and Tuutmlu put a brilliant recovery drive during his opening stint and passed no less than eleven cars before heading into the pit lane for his mandatory pit stop. South Africa´s Kelvin van der Linde came 12th after another strong performance in the second part of the race.

“It was such a pity our malfunctioning differential in the morning as I wasn´t able to set a proper qualifying lap time. But Car Collection Motorsport made a great effort to fix it for race one and, besides, we tried a new setup and it paid off. I really could push throughout my stint. I made a good start and I managed to overtake several cars”, Tutumlu underlined. The Barcelona-born driver stressed “after pitting when I had moved up to 18th, Kelvin completed another good stint to finish 12th and 3rd Audi classified. We could have gained more places but unfortunately a crash at the chicane and a couple of slow cars ruined our chances to improve our result. Despite problems, I feel happy with our performance. Let´s see if we have a problem-free qualifying session and to fight for a top-ten finish tomorrow”.