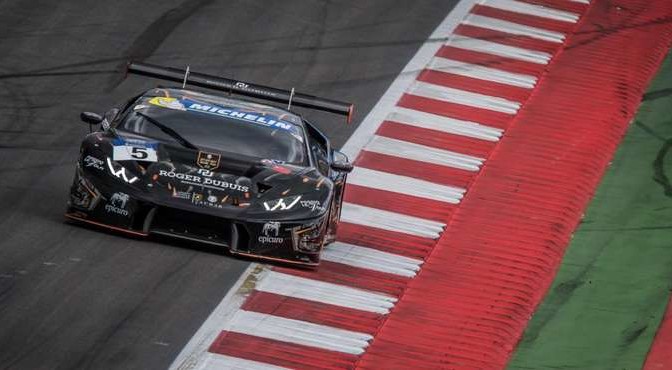 FFF Racing Team will conclude the 2016 season by representing Lamborghini Squadra Corse with a pair of Huracan GT3s in the second edition of the esteemed FIA GT World Cup in Macau (19-20 November).

Founded on a season in the 2015 GT Asia Series, the Roger Dubuis-backed FFF Racing Team has burgeoned into a force to be reckoned with in Pro Am sportscar racing by quickly notching up successes on both the European and Asian continents.

It has maintained a presence in the GT Asia Series alongside a dovetailed campaign in the newly-established Michelin GT3 Le Mans Cup and one-off exploratory outings in other high-profile GT championships, such as the International GT Open.

The FIA GT World Cup, though, is an annual showdown for competitors from the globe’s most prestigious GT arenas and it stands as the reference event for all GT teams, drivers and manufacturers.

The planet’s top teams, drivers and manufacturers all assemble in Macau to vie for the coveted World Cup at an event that is designed to harmonise all FIA-sanctioned GT3 championships and generate extensive media exposure.

For FFF Racing, the FIA GT World Cup is a triumph that must feature on its rapidly expanding record of achievements and Team Owner, Sean Fu Songyang, said: “For FFF Racing Team, it is an honour to be going back to race around the iconic streets of Macau in the biggest GT event of the year as a representative of Lamborghini Squadra Corse.

“This is FFF Racing’s second successive year of competition as a team and we will go to Macau with our Lamborghini Huracan GT3s to try to bring the World Cup for GT cars back to Italy. Of course, it is always a very tough race to win, but we have a great car and team and will have the best Lamborghini GT drivers available, so it will be exciting and we should bring home a very strong result.”

Head of Lamborghini Motorsport, Giorgio Sanna, added: “Lamborghini Squadra Corse is proud to compete in the next FIA GT3 World Cup In Macau with a top Asian team like FFF Racing, as we share the same passion and interest in promoting the best and most talented young drivers. We look forward to this important challenge.”

FFF Racing is yet to confirm its drivers for the 2016 FIA GT World Cup in Macau and an announcement will follow in September.