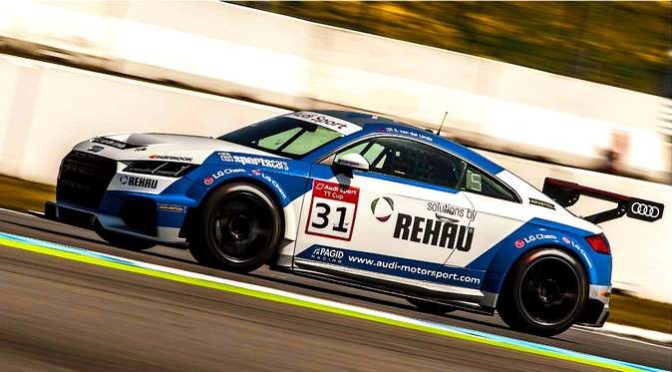 Sheldon van der Linde may have just turned 17, but he has made the 2016 Audi Sport TT Cup his own since his sensational arrival there earlier this year. Now the South African wunderkind intends maintaining the status quo with nothing less than another double victory when the series heads to the tight and tricky Norisring street circuit for its third round 25-26 June.

Sheldon has won three of the four races so far this season, with a dominant double-winning performance on his debut at Hockenheim before scoring another win at the Nurburgring: “I have had a dream start to the season, that’s for sure,” young van der Linde admitted. “Hockenheim was perfect and then we won another race at the Nurburgring, so now it’s a case of maintaining that momentum and chasing more race wins.”

“Norisring is an epic circuit — it’s a classic and a huge crowd favourite but it is super tight and tricky, so it will be a very different challenge,” he added. “I’ve been home since the last race and I’m charged up and ready — I cannot wait to race again!”

Follow Sheldon’s progress at the Nurburgring through the Norisring weekend on live streaming and live timing – all that and the weekend program is available at www.audi-motorsport.com.