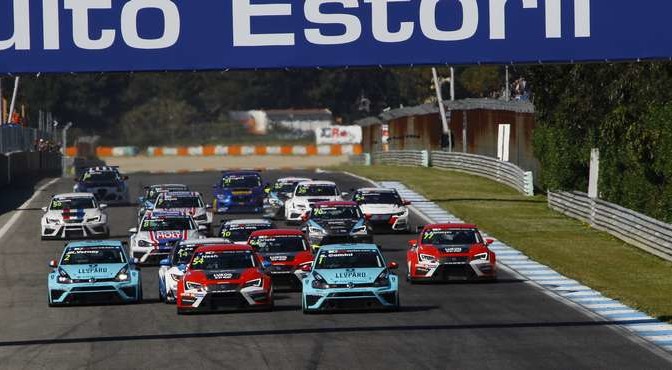 TCR drivers treated the Portuguese fans to a pair of exciting races that saw Gianni Morbidelli (WestCoast Racing) and James Nash (Craft-Bamboo Lukoil) claim one victory apiece and jump to the top of the Drivers’ Championship, with the Italian leading the Briton by only one point.

The close fights in both races – but also in Saturday’s qualifying session – that involved Honda, SEAT and Volkswagen cars, proved that the latest revision of the Balance of Performance had hit its target in equalizing the three fastest models in the field.

That factor also enabled a number of other drivers to shine. Some of them were able to capitalize in terms of results like the Leopard Racing duo of Jean-Karl Vernay and Stefano Comini who drove their Golf Gti cars to podium finishes. Others were only capable of coming close to those exploits, like Mat’o Homola who lost a possible win and even a podium position in the final laps of the first race.

Pepe Oriola, who had dominated the season opener in Bahrain, had a very disappointing weekend. Only seventh in qualifying, he was betting everything on the reverse grid of the second race, but a clash with Loris Hezemans unbalanced his car and jeopardized his hopes. He is now third in classification, 14 points off the lead.

The TCR International Series will resume on May 6 and 7 at Spa-Francorchamps, Belgium, for rounds 5 and 6.

Gianni Morbidelli and his WestCoast Racing Honda Civic took their first win of the season in a lively Race 1 at Estoril, which heated up in the second half. Despite having had less practice mileage than his direct rivals, the Italian put in a great performance, trailing Mat’o Homola, who led most of the race.

The Slovak defended his position hard, but from mid-race onwards he struggled with the deterioration of the front tires and eventually had to surrender 3 laps from the end. Later he lost two more positions to Leopard Racing’s Volkswagen Golf cars of Jean-Karl Vernay and Stefano Comini, who clinched their first podium finishes of the year.

On his comeback to the series, Loris Hezemans was a good 9th, while the other Baporo Motorsport SEAT of local hero Francisco Mora took the last available point.

Oriola and Morbidelli are now on top of the standings on equal points.

The second race will kick off at 17:05 local time.

Lap 2 – Homola attacks Morbidelli at the beginning of the second lap and takes the lead; Gleason pits with engine problems

Lap 3 – Pellinen is passed by both, Comini and Afanasyev; Cerruti pits with transmission problems; Kajaia goes very wide on the grass but rejoins

Lap 7 – Grachev passes Borkovic for 10th, while Mora fights with Kajaia for 12th

Lap 8 – Hezemans chases Oriola, who is eighth and hits the tyre pack at Turn 9

Lap 11 – The fight between Homola and Morbidelli heats up, with the two making contact and driving abreast in the “esses”

Lap 12 – Morbidelli eventually manages to pass Homola in Turn 3; the latter is unable to resist also to Vernay

Lap 14 – Grachev passes Hezemans for 9th and they make contact

Lap 15 – Morbidelli wins from Vernay, Comini and Homola; the last thrill is a contact between Borkovi ć and Grachev who were fighting for ninth with Hezemans and Mora

Race 1 – Quotes from the podium finishers

Gianni Morbidelli (winner): “Winning is always the best thing, so I am quite happy! I knew that it was key to preserve the tyres in the first part of the race and that is what I did. I also saw that Homola was a little bit harder on his tyres and figured that he would be in trouble. It was a nice and fair fight, because he was faster on the straights and defended very well his position, but eventually he started to feel the pressure and I could pass. It was about time, because Vernay and Comini were getting very close and I was in the uncomfortable position of having to attack and defend at the same time. The car felt good and I thank the team for the good work done to solve the power steering problem we had in practice and qualifying.”

Jean-Karl Vernay (second): “It’s a good result, the best possible in this race, and it’s good to score my first points. I had a good start but like Morbidelli, tried not to stress the tyres. The duel between him and Homola allowed me to get closer to them. Unfortunately, at some point, they had a contact and debris broke my windscreen, so I had to close my helmet visor to continue. Towards the end I was well-placed to use any opportunity that may come from the fight between the first two and eventually, I could pass Homola, even if I didn’t want to take any risk.”

Stefano Comini (third): “After free practice we completely changed the set-up of the car, and it proved the right thing to do. The car felt much better. My start wasn’t great as I wanted to avoid any problems and lost one position. The first half of the race was a little bit boring, but then things got livelier. I managed to overtake Pellinen and then Vernay and I joined the two leaders. Third is a good result, but we still have a lot of work to do.”

It did not take much time to James Nash to find his way to victory in his return to Touring Car racing. After an excellent weekend in Bahrain, the Brit of Team Craft Bamboo Lukoil took his maiden win in the TCR International Series in Estoril.

The Italian brilliantly won a couple of duels, notably with Jean-Karl Vernay and Sergey Afanasyev, to take a second podium finish this weekend and grab the leadership in the points standings, albeit by a single point over Nash.

Afanasyev claimed an excellent 4th ahead of Vernay, Aku Pellinen, Davit Kajaia, Mat’o Homola and Francisco Mora, while Pepe Oriola finished only 10th, after struggling the entire race with a car damaged in a contact with Loris Hezemans at the start.

Lap 2 – Nash pulls away and creates a 2-second lead

Lap 3 – Homola passes Grachev for 9th; Borkovi ć and Tassi make contact and the former retires with a pierced radiator

Lap 4 – Oriola’s car is out of balance after the contact with Hezemans at the start; the Spaniard loses positions to Afanasyev, Morbidelli, Pellinen and Kajaia, dropping from fourth to eighth

Lap 9 – Vernay in P3 is chased by Afanasyev and Morbidelli

Lap 12 – Vernay and Morbidelli are in a close fight, eventually the Italian passes the Frenchman for third

Lap 15 – Nash starts to lift off a bit but has everything under control and wins ahead of Comini, Morbidelli, Afanasyev and Vernay

Race 2 – Quotes from the podium finishers

James Nash (winner) : “It was probably the best start of the season for me and that helped much. I skipped free practice to save t y res and that allowed me to push quite hard in the first part of the race and build some advantage. It was a stressful gap though, because at the end of the race I struggled with the t y res. Still, everything went well and now I am enjoying a good position in the championship, only one point behind Gianni. Too early to say anything, the championship is still very long and it will be about consistency.”

Stefano Comini (second) : “I am second, so climbing another step after third in Race 1 , which is good. My start was not very good and I missed the first braking point. After that I was behind my team mate and could pass him when he did a little mistake in turn 4. There was not much I could do to reduce the gap with Nash, so I did not push too hard, not to kill the t y res, and I went for some heavy points.”

Gianni Morbidelli (third) : “It was again a good race, I am happy with the result. I lost some time behind Oriola and I think I was a little bit too hard on my front t y res to try to pass him. After that, I had some understeer and mostly tried to preserve the t y res. Being first in the championship doesn’t mean much, it’s way too early.”

All drivers were able to start in the second race

All the TCR drivers managed to take part in the Estoril second race today.

The technical failures that stopped Kevin Gleason’s Honda Civic for good and forced Michela Cerruti’s Alfa Romeo Giulietta to pit were both solved.

The mechanic of Mulsanne Racing discovered a false contact in the gear linkage and sent Cerruti back on track after a brief stop. As for WestCoast Racing, Gleason’s Civic suffered from an engine wiring problem that was also solved.

Both, Gleason and Rangoni took the start from the back of the grid as their teams asked for neutralization of the parc fermé rules.