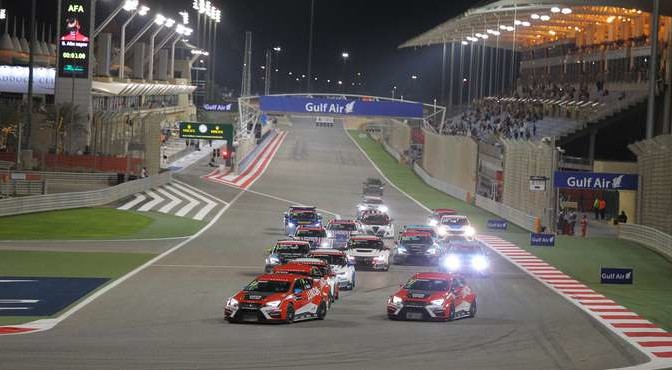 The 2016 TCR International Series kicked off with a breath-taking night race during the Barhain Formula 1 Grand Prix.

The 2015 vice-champion Pepe Oriola started his new campaign on a high note; with a spotless performance the young Spaniard drove his SEAT León of Team Craft-Bamboo Lukoil to claim an authoritative victory. Oriola got the better of his team-mates James Nash and polesitter Sergey Afanasyev during the first lap, then was able to control Nash’s attacks in the early stages and the return of Gianni Morbidelli’s Honda Civic in the final laps.

The Italian driver put in a strong effort to recover from fourth to second, jumping ahead of Afanasyev and Nash who finished in the order. Dušan Borković was able to finish in sixth position, inches behind Aku Pellinen, after he had been involved in a four-car clash with Stefano Comini, Kevin Gleason and Jean-Karl Vernay.

The reigning champion Comini was classified seventh and best of the Volkswagen drivers, while Mat’o Homola and Davit Kajaia finished in eighth and ninth at the end of a long and fair fight.

None of the 18 cars retired for technical reasons, only Gleason and Vernay did not finish because of the incident. Jordi Oriola’s Opel Astra, Luigi Ferrara’s Subaru and Michela Cerruti’s Alfa Romeo Giulietta managed to complete the race, just like the two Bahraini drivers in the Bas Koeten Racing old SEAT cars.

Start – Afanasyev and Borković take a bad start on the front row; Nash takes the lead clashing with P. Oriola; at the back of the field, Cerruti is squeezed by Belicchi and Grachev.

Lap 2 – Gleason passes Comini for 7th; Kajaia are in a fight Homola for 11th

Lap 3 – Afanasyev tries to resist to Morbidelli, but eventually concedes the position.

Lap 4 – Vernay passes Pellinen for fifth, while Nash chases P. Oriola; Borković closes in on Comini, they make contact and collect Vernay and Gleason who are forced to retire

Lap 5 – Kajaia passes Grachev for 9th; Morbidelli is closing the gap from the leading duo of P. Oriola and Nash

Lap 6 – Comini takes 6th from Homola who strikes back and regains the position; eventually both Comini and Kajaia are able to overtake Homola

Lap 7 – Morbidelli passes Nash for 2nd on the straight, but the Brit retakes the advantage, just to lose again it shortly afterwards

Race 1 – Quotes from the podium finishers

Pepe Oriola (winner): “It’s definitely a good way to start the season. It was a pretty good race for me, although not easy. I did only one mistake at the beginning, when I attacked too hard my team-mate James Nash. Other than that, the only real trouble is that the tyres started to get consumed by mid race, which brought massive understeer. That allowed Gianni to close the gap a bit, but I don’t think he was as fast as us today. It is a really enjoyable experience to be racing here at Bahrain within the F.1 Grand Prix, although it means less practice time.”

Gianni Morbidelli (second): “Pepe is right: we are not as quick as the SEAT cars! It is clear that we have to work a lot to catch up, but the race was very useful to understand where we are and to see our strong and weak points. There was some good fighting along the way too, that’s nice too, but the most important was that I could score good points for myself and WestCoast. Second today is a very good result towards the championship.”

James Nash (third): “It’s definitely a good result for the team and also for me. My race was good and it’s nice to be immediately competitive on my return to touring car racing. Maybe we fought a little bit too hard with Pepe, but the important thing is that we brought home an excellent result. I really look forward to this championship and to working with my team.”

Craft-Bamboo Lukoil’s Sergey Afanasyev claimed his first pole position in the TCR International Series putting in a perfect lap in Q2 that enabled him to beat Dušan Borković of B3 Racing Team and his own team-mate James Nash.

“It’s a very strange feeling, because I wasn’t even aware of the result, as the radio was working on and off. I had a good pace but was certainly not under the impression that it could mean pole position!” the delighted Russian said.

Gianni Morbidelli failed to make the top-three by only two thousandths of a second; Pepe Oriola and Aku Pellinen were placed in fifth and sixth in very close session that saw the fastest six drivers covered by less that two tenths.

Jean-Karl Vernay was the fastest of the Volkswagen drivers, qualifying his Golf Gti in ninth, just ahead of Davit Kajaia who won pole position on the top-ten reverse grid for tomorrow’s Race 2.

Jordi Oriola was classified 12th in the only Opel Astra that was admitted to Q2, while Michela Cerruti’s Alfa Romeo Giulietta and Luigi Ferrara’s Subaru STi – that suffered from a broken drive shaft – did not make the cut.

The third B3 Racing Team SEAT León TCR has been withdrawn from the Bahrain meeting due to the damage resulted in a crash during yesterday’s second Practice session.

Attila Tassi lost control and crashed into a wall head on. The young Hungarian escaped unscathed, but the car suffered from extensive damage to the front. Notably the left rail of the engine compartment was badly bent and could not be repaired at the track.

Team manager David Bári commented: “We are very sorry that we have to withdraw the car and that Attila cannot make his TCR debut, but that’s racing. We’ll see what we’ll do when we are back in Europe, but I believe it is going to be easier to get a new chassis altogether.”

There were some illustrious guests in the TCR paddock in Bahrain last weekend. Double WRC champion Carlos Sainz was eager to visit some old friends, like Claudio Bortoletto, today at Mulsanne Racing, who led in the past the Jolly Club team, the successful rally team for which the Spaniard was driving in his early years.

Volkswagen Motorsport Director Jost Capito, the man behind the Golf Gti TCR project was, of course, very interested in checking the form of the cars entered by Leopard Racing and Liqui Moly Team Engstler in the 2016 season-opener. This has been one of the last public appearances of Capito in his current capacity, as it has been already announced that he will soon join the management of McLaren F1.