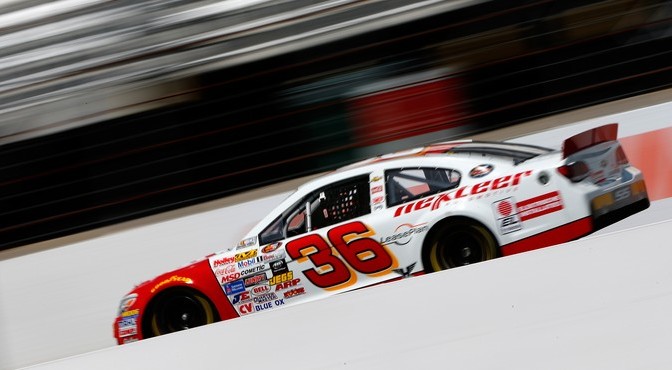 “It was an important addition to my experience as an oval racer. There is little track time before the races and to make up for it is very difficult, so I’m happy with my race globally,” said Kumpen, who finished 21st in the race won by William Byron. “At the beginning I was kind of stuck behind some cars, but I posted good times at the end and we achieved our main objective, which was to gain precious experience and avoid mistakes.”

The Belgian’s goal is to compete in the 2016 NASCAR XFINITY Series season opener at the Daytona International Speedway and Friday’s race represented the first step of this summer’s program, which also includes three NASCAR XFINITY Series races. Kumpen had to quickly adapt to a whole new – and very fast, the race was completed at an average speed of over 200 Km/h – kind of track, avoiding any trouble to obtain NASCAR’s license to join the NASCAR XFINITY Series field.

“The first 50 laps went all green and it was the longest run ever for me in this car. We struggled a little bit to find the right setup in practice and I had to work a lot at the beginning of the race, but then we went better and better during the run and in the end we completed a good race and didn’t make any mistake, which was really important,” concluded the 36-year-old from Hasselt, Belgium.

Kumpen will now head to Caraway Speedway for a test to discover his XFINITY Series car before the August 1st race at Iowa Speedway. The reigning NASCAR Whelen Euro Series Champion will also race at Phoenix, on November 14, and Homestead on November 21.
ABOUT NASCAR WHELEN EURO SERIES

The NASCAR Whelen Euro Series was founded in 2008 and established the NASCAR official European Series in January 2012 thanks to a long-term partnership signed with NASCAR (National Association for Stock Car Auto Racing), Team FJ, a Motorsports company located in Blois, France, and Whelen Engineering as title sponsor of the Series.The season is made up of 24 races, equally split among ELITE 1 and ELITE 2 divisions, on the best European tracks. Euro NASCAR introduced a stunning innovation on July 7-8, 2012 by organizing the first ever NASCAR race on an oval track in Europe on a half-mile speedway built in the downtown of Tours (France). With four races in two days, these 400 HP V8 monsters provide pure racing action and thrilling bumper-to-bumper battles as well as a lot of family fun around the track! In the pure NASCAR tradition, race fans can get closer to the action than ever and feel the unique in Europe paddock atmosphere thanks to drivers, teams and cars always available for the spectators.The series attracts drivers from all over the world, all willing to fight on track for the win and take the first step towards becoming a NASCAR star in the U.S.