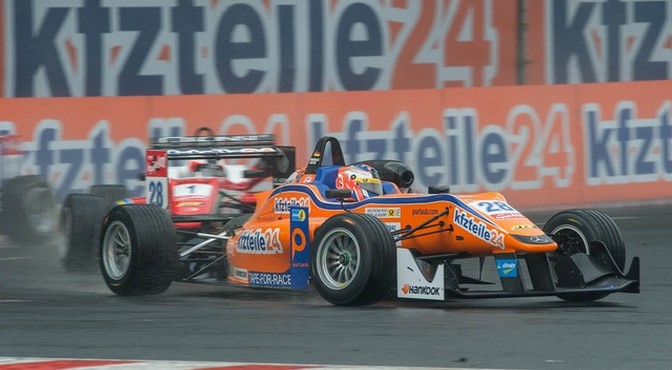 The German Team kfzteile24 Mücke Motorsport from Berlin scored the first win of the season at the sixth season event of the FIA Formula 3 European Championship this weekend (27th/28th of June) at the Norisring in Nürnberg. Maximilian Günther (Dallara Mercedes) won the 17th race at the beginning of the second season half on Saturday afternoon. The young driver from Rettenberg started from position twelve at the 2.3 km long city course and scored his second podium placing after the second place in Pau (France). And now he is on position three at the rookie championship, at the overall ranking he is the best placed driver of the racing stable from the German capital city on position six. Furthermore the guy from Rettenberg scored points on position four at the Norisring on Saturday morning. On Sunday he got hit by a combatant on a dry track at the 18th season run and dropped out due to that at the seventh lap.

„Maxi was in a good position to still reach a podium placing at that moment. So the sudden end with no fault of his own is even more annoying for him. All in all he showed a great performance this weekend“, said team principal Peter Mücke. „And our other very young drivers proofed that they get better more and more. So we are optimistic for the second half of the season.“ Maximilian Günther was very happy about his first season win at the FIA Formula 3 European Championship on the Norisring. „That was a really good race. I had a very good feeling in the car and a lot of overtaking manoeuvres. It was great fun“, explained the driver from Rettenberg.

Further top ten placings for the German Team kfzteile24 Mücke Motorsport at the Norisring were scored by the Dane Mikkel Jensen on position five on Sunday and six on Saturday afternoon (12th at the 16th season run on Saturday morning) and the US American Santino Ferrucci on position six on Sunday (earlier two drop outs after collisions). Jensen is on position eight and Ferrucci on position ten at the drivers ranking. Jensen moreover is fifth at the rookie championship. The Italian Michele Beretta finished on position 20 at the city course in Nürnberg on Sunday (earlier two drop outs after collisions). And Kang Ling from China (all Dallara Mercedes) finished on the positions 21 and 22 and dropped out once.

The seventh season event of the FIA Formula 3 European Championship is scheduled from 10th to 12th of July with the runs 19, 20 and 21 in Zandvoort (Netherlands).