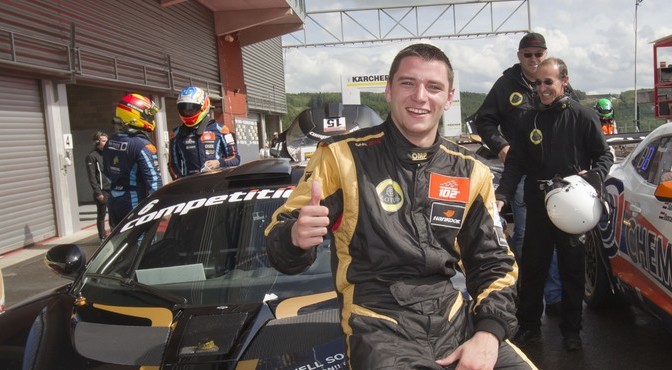 Pavel Lefterov took two dominant wins in the Competition102 GT4 European Series at Spa-Francorchamps. The Bulgarian racer in the AM division outperformed his rivals in the PRO category at his favourite track in changeable weather conditions. Duncan Huisman (NED) / Sandor van Es (NED) attacked the Lotus Evora GT4 driver, but they had to look in their mirrors as championship leaders Jelle Beelen (NED) / Marcel Nooren (NED) were approaching. By taking the chequered flag both races as second in the PRO class, Beelen and Nooren secured eight podium finishes out of eight races. AM class leader Daniel Uckermann finished fourth in both occasions, but was classified second in his division.

The domination of Lefterov directly started in race one when he made a brilliant move for the lead by passing two rivals at once in Les Combes. One of them was Huisman who drove a steady first stint before handing over the wheel to Van Es. The Chevrolet Camaro GT4 race driver was also attacked by guest driver Luke Davenport (GBR) with the Ginetta G55 GT4. But the British team, dropped down the order after the mandatory pit stop. With Huisman / Van Es finishing second overall and first in the PRO division, teammates Beelen / Nooren brought the car home in an impressive third overall despite a technical issue prior to the race that resulted in a starting positing at the back of the grid. Third place in the PRO category was secured by Ricardo van der Ende (NED) / Bernhard van Oranje (NED) even after a drive-through penalty. They finished behind AM driver Daniel Uckermann (GER) and in front of Tristan and Yorick Boorsma (NED) who’ve joined Lefterov at the podium ceremony for AM drivers.

Lefterov was able to start the second race from pole position and however briefly challenged by the two Camaro’s, the Bulgarian racer extended the gap to his rivals lap by lap. Van Es started from fifth, but was able to move up to third very quickly and chased his teammate Nooren for first position in the PRO category. Van Es was dealing well with the wet track conditions and passed his rival before the mandatory pit stop. From there, Huisman took over the wheel and received a fresh set of wet tyres in an attempt to stop Lefterov. However, the experienced driver of V8 Racing was unable to make a move as he needed to look after his tyres. Van Es / Huisman finished in front of Beelen / Nooren. Uckermann maintained his fourth place and ranked second in the AM division. Sascha Halek (AUT) and Peter Ebner (AUT) brought the KTM X-BOW GT4 home in fifth position overall and third in the PRO category. Thomas Krebs (DAN) and Carsten Struwe (GER) took third in the AM class by finishing ninth overall with the Porsche 981 Cayman SP.

“I’m really happy to win both races as Spa-Francorchamps is my favourite circuit. It’s like a dream coming true,” said Lefterov. “We struggled a bit during the first three events and now the Lotus Evora GT4 is behaving brilliantly as we’ve found the right setup. Race two was quite tough as the track dried up. I was constantly driving from one wet spot to another to cool the tyres. Hopefully we can repeat the performance at the Nürburgring.”

Huisman and Van Es were happy to take a double victory in the PRO division after dealing with shock absorber issues and tyre degradation. “It suddenly began to rain when we made it to the starting grid. There was no visibility during the first few laps and therefore I decided to be careful. Afterwards I could push and overtake the other Camaro,” said van Es. His teammate Huisman added that he was relieved to overcome the technical issues and to end the weekend with two wins: “The mechanics build two new shock absorbers overnight and therefore it’s great to be back on the podium. Especially after the last event at the Red Bull Ring when we ran out of luck. In the second race I tried to close the gap to the Lotus in front of me but the track was drying up very quickly and had to conserve the tyres. We’re happy with taking both wins.”

Championship leaders Beelen / Nooren have collected 162 points so far which results in a 32 point lead over Huisman. Jörg Viebahn (GER) is still in third with 111 points. Uckermann tops the AM classification with 172 points, 66 more than Lefterov.

The next two races of the Competition102 GT4 European Series are taking place at the Nürburgring on 14 – 16 August 2015.