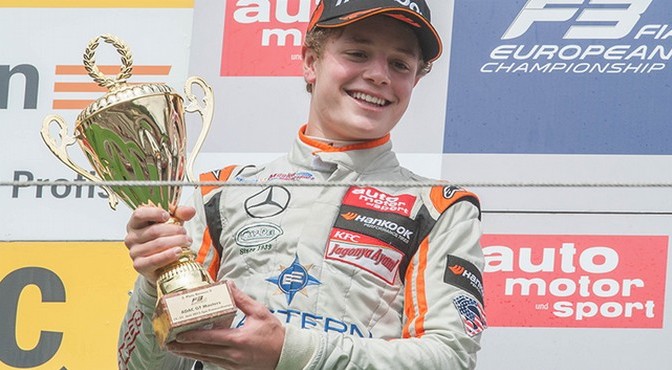 Santino Ferrucci of the German Team kfzteile24 Mücke Motorsport from Berlin celebrated his first podium placing at the fifth season event of the FIA Formula 3 European Championship with the runs 13 to 15 this weekend (20 th/21st of June) in Spa-Francorchamps (Belgium) that were held in the main programme of the ADAC GT Maters. The US-American finished second at the 14th run on Saturday afternoon after he scored the fastest lap time and slightly missed the podium on position four in the morning on the 7.004 km long rollercoaster track in the Ardennes. At the race on Sunday he finished 12th.

And his Dane team colleague Mikkel Jensen also scored points on seventh position at the opening race. Furthermore he started from pole position for the first time at the 14th run and took the lead on Sunday after a perfect start from position two. But he was unlucky in both races, because he got pushed off track by combatants. Maximilian Günther from Rettenberg finished in the top ten two times on position seven and eight and finished 13th at the opening race. And he is the best placed Mücke pilot of the overall ranking (6th) and the rookie championship (4th). With Jensen on position eight and Ferrucci on ten, two more pilots of the racing stable from the German capital city are in the top ten of the drivers ranking. Michele Beretta (positions 21, 24, 21) from Italy and Kang Ling (26, drop out, 20/all Dallara Mercedes) from China also held the pace under difficult weather conditions in the field of more than 30 drivers of the toughest juniors´series in the world.

„I am really happy about the first podium placing of Santino, who scored the fourth podium placing for our team this season same time. Our drivers are able to keep up with the others at the front of the field in this tough rookie series. The fastest lap time and the other good placings proofed that. All our Youngsters gave their best on this tough track under difficult weather conditions“, said Peter Mücke. The team principal, who sat behind the wheel of the Ford “Zakspeed” Turbo Capri at the ADAC Sachsenring Classic at the DRM Klassik Pokal this weekend and scored two wins, got always updated about the happenings in Spa-Francorchamps. „All in all it was a great racing weekend for our team. At least one of our drivers scored a podium placing in all the three series we competed at this weekend. Because our guys scored a win and four further podium placings at the ADAC Formula 4“, said Peter Mücke.

The next races for the Team kfzteile24 Mücke Motorsport are already scheduled for next weekend (26th to 28th of June) at the FIA Formula 3 European Championship at the Norisring in Nürnberg in the main programme of the DTM. And after that the home race at the ADAC Formula 4 is scheduled for the racing stable from Berlin from 3rd to 5th of July at the Lausitzring near Klettwitz in southern Brandenburg.