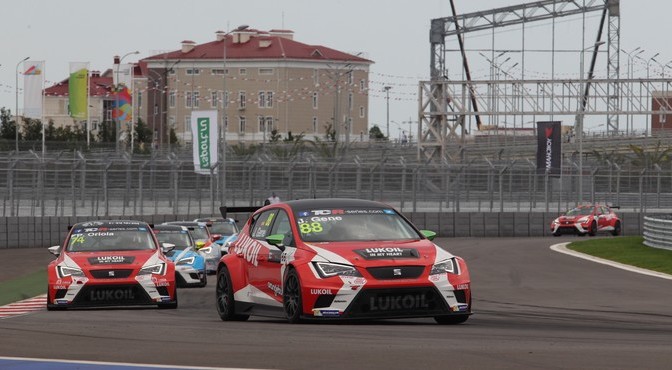 The first visit of the TCR International Series to Russia provided a completely shake up at the top of the standings and the battle for the first Drivers’ title in the series is closest than ever.
With the top four drivers – Stefano Comini, Pepe Oriola, Gianni Morbidelli and Jordi Gené – covered by only twenty points and the fifth (Andrea Belicchi) and sixth (Kevin Gleason) still within striking distance, anything can happen in the four remaining events.
The SEAT cars, as it was anticipated, shone on the Sochi Autodrom, but even beyond expectations, as the Honda cars never could find the right pace. Gené and Comini shared the race wins, with the Swiss driver taking the best advantage in terms of points harvest, as he is now back in the leadership, two points ahead of Oriola. The Spaniard, with a couple of second places, is one of the other happy men at the end of this weekend.
There is little doubt that Morbidelli deserved the title of ‘Mr Unlucky’; the former point-leader pocketed only a 7 th in Race 1 and was forced to withdraw from Race 2 because of a turbo failure.
Belicchi and Mikhail Grachev took the other podium spots, finishing third in Race 1 and 2, respectively. On home soil, the Russian impressed from the beginning and was rewarded with his first TCR podium in Race 2, where he led the three initial laps. With a fourth and a fifth, Sergey Afanasyev also gave local fans great satisfaction while the TCR International Series community will certainly bring back home a pleasant memory of the Olympic atmosphere surrounding the event and the warm welcome on the shores of the Black Sea.
The TCR International Series will resume on July 12 th at the Red Bull Ring, Austria, for Round 15 and 16.

Jordi Gené and Pepe Oriola pleased Craft-Bamboo’s Russian sponsor, Lukoil, and its many guests by taking an undisputed 1-2 in Race 1 at Sochi Autodrom.
The two red-and-white SEAT cars dominated from start to finish, with the two Spanish teammates running closely but not engaging in serious battle.
The SEAT domination was completed by Andrea Belicchi who took third after a relatively solitary race. In the opening laps, the Italian had to keep at bay the attacks of Mikhail Grachev, who later lost ground progressively and had to concede fourth to Stefano Comini and fifth to Sergey Afanasyev, eventually the first among the Russian drivers.
The Honda Civic cars were not in a position to show great pace, with Gianni Morbidelli and Kevin Gleason unable to do better than 7 th and 8 th, respectively.

Key moments
Grid – Few drops of rain fall on the grid, but the race kicks off on a nearly dry track
Start – Good start for Gené who precedes Oriola, Belicchi, Grachev, Comini and Engström
Lap 1 – Afanasyev passes Morbidelli for 7 th after running wide in a corner
Lap 3 – Grachev tries an attack on Belicchi at the braking; Afanasyev and Engström fight for 6 th, with some rubbing, as a result the Swede gets passed by Nykjær and Morbidelli
Lap 4 – Belicchi (3 rd) takes some breathing space ahead of Grachev who is chased by Comini
Lap 6 – Gené, Oriola and Grachev receive a warning for trespassing the track limits; Morbidelli tries to attack Nykjær
Lap 7 – Grachev is losing ground and gets passed by Comini and Afanasyev, dropping to 6 th
Lap 9 – Engström passes Nykjær after going too wide and gives back the 8 th position shortly after
Lap 10 – Rakhmatullin stops in the pits with an oil pressure warning, while Afanasyev and Grachev make contact
Lap 11 – In the last lap Gené makes a small mistake but keeps the advantage while Engström gets sideways on a slippery kerb hitting Nykjaer and damaging the radiator
Race 2 – Third success of the season for Comini

Stefano Comini took his third win of the season in a lively Race 2 at Sochi and jumped back on the top of the overall standings. The Swiss driver of Target Competition built his success from the beginning, with a great start that put him in P2 behind Mikhail Grachev, the surprising initial leader after a superb start. Comini took the lead in lap 4, being only mildly threatened by Pepe Oriola in the last laps. The Spaniard, with another valuable second, now lies second in the standings only two points behind Comini.
Mikhail Grachev took a well-deserved first podium of the season on home soil, after a weekend where he performed brilliantly, being also the best of local heroes. Sergey Afanasyev and Jordi Gené finished fourth and fifth, ahead of the first Honda driven by Kevin Gleason.
It was a black day for Gianni Morbidelli who could not even take part in Race 2, as the turbo of his Civic broke in the last lap of Race 1 and couldn’t be replaced in time despite the efforts of West Coast Racing’s crews.

Key moments
Grid – Engström and Morbidelli are demoted to the bottom of the grid due to technical interventions
Start – Comini gets abreast with Gleason and Nykjær, but Grachev pips everybody from the outside at turn 2 and takes the lead; Morbidelli is still in the pit lane, his crew working on the car
Lap 1 – Grachev leads ahead of Comini, Afanasyev, Gleason, Belicchi, Oriola and Gené
Lap 2 – Afanasyev drives sideways and is passed by Gleason, Belicchi and Oriola; Nykjær drops after a contact with Engström
Lap 3 – Morbidelli gets out of the car and gives up; Belicchi and Oriola pass Gleason for 3 rd and 4 th
Lap 4 – Comini is chasing Grachev; Gleason is attacked by Gené who has passed Afanasyev
Lap 6 – Comini passes Grachev at turn 2 and takes the lead; Belicchi also tries to attack the Russian and the two collide in the last corner, with Belicchi spinning and hitting the wall
Lap 7 – Oriola is second behind Comini and followed by Grachev and Afanasyev who has passed Gené
Lap 8 – Oriola starts chasing Comini, with Grachev a stable third and the rest of the group further aback
Lap 10 – Oriola gets closer to Comini, but doesn’t seem in a position to attack him
Lap 11 – Comini takes his third success of the year ahead of Oriola, Grachev, Afanasyev, Gené and Gleason
What the race winners had to say

Jordi Gené, winner of Race 1: “The race was just fantastic, everything went as planned and the SEAT cars seemed to like this track a lot. Having Pepe Oriola behind me gave me some confidence that he wouldn’t do anything silly that could jeopardize a good team result, something very important here, in the home track of our sponsor. Still, he was better in some parts of the circuit, and I was in others, so nothing was easy. I think my brakes balance wasn’t ideal and that showed mostly in turn 14, where Pepe could brake much later, gaining almost 40 meters. I feared he could take a tow there and pass me but luckily, that didn’t happen.”

Stefano Comini, winner of Race 2: “A great weekend for me, as I was able to retake the leadership in the championship; I am really happy. My objective arriving here was to take heavy points, so I can be happy. Race 2 was really funny, I hope also for those who were watching. I took a perfect start, but Mikhail Grachev did even better, I was really surprised to see him passing everybody at the first corner. I could pass and take the lead a couple of laps later and that was the right moment, as I then started to struggle a bit with my tires. I found the circuit different when you are racing, as opposed to practice or qualifying. It’s challenging on tires and it’s not so easy to overtake.”