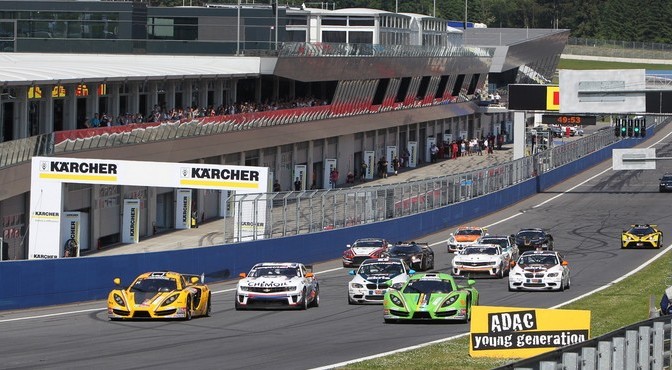 The Competition102 GT4 European Series passed the halfway point of the season at the Red Bull Ring and now looks forward to race at another Formula 1 circuit. The ADAC GT Masters will again be partnered and this time at the iconic Spa-Francorchamps during the weekend of June 21. It will be interesting to see if championship leaders Marcel Nooren and Jelle Beelen can continue their podium streak. With six trophies out of six races, the Dutch drivers have built a 31-point lead over Jörg Viebahn (GER) who is ranked second in the PRO division and will race a BMW M3 GT4 at Spa. Meanwhile Daniel Uckermann (GER) comfortably leads the AM class, but he will look in his mirrors for the young drivers Thomas Krebs (DAN) and Pavel Lefterov (BGR) who are challenging him.

Nooren (NED) and Beelen (NED) reached the podium in all six races so far. Therefore the Chevrolet Camaro-drivers currently conduct the PRO class with a comfortable lead. Teammates Luc Braams (NED) and Duncan Huisman (NED) suffered technical difficulties in Austria, and want to strike back. Huisman will this time be partnered by journalist Sandor van Es (NED). Reigning champions Bernhard van Oranje (NED) and Ricardo van der Ende (NED) haven’t been lucky so far this season, including a flat tire and an overheated engine in Austria. They are hoping to turn the tide going into the second half of the season.
Despite missing the opening races in France, Peter Ebner (AUT) and Sascha Halek (AUT) are in good form and scored after Zandvoort another win with the KTM X-BOW GT4 at the Red Bull Ring. They had the pace to join their rivals onto the podium of race two, but an unfortunate extra pit stop to change the right rear tyre destroyed their chances. However, the ZaWotec racers are just two points behind Braams / Huisman, sitting fourth position in the standings.

Their teammate Daniel Uckermann enjoys a royal lead in the AM division. He secured two third places at Nogaro with the Lotus Evora GT4 and won the previous four races with the new KTM X-BOW GT4. Who can stop the German? Thomas Krebs is one of the contenders. Racing the Porsche Cayman 981 SP, the Danish youngster and his PROsport Performance team have clear ideas to find extra horsepower to play an offensive role at Spa-Francorchamps. Pavel Lefterov currently sits in third in the GT4 AM Class.
The Swedish racers Thomas Martinson and Oskar Krüger are targetting Spa-Francorchamps to score their first podium finish for Bald Eagle Racing this season. In the AM division they compete against another BMW M3 GT4 of Tristan and Yorick Boorsma, who are returning in the Competition102 GT4 European Series. The Dutch brothers aim for a champagne shower too after having gained valuable experience at the Belgian track last year.

Tolman Motorsport enters a Ginetta G55 GT4. Normally competing in the British GT Championship, the British drivers David Pattison and Luke Davenport take the opportunity to practice the Belgian track before they race it again next month.

Hendrik Still scored his second pole position at the Red Bull Ring and knows the Belgian race track very well. “I think I was there about five times this year, mainly for coaching. Last time I drove a Ferrari Challenge car, which was great fun,” said the German driver. Speaking about his favourite corner: “I really like Eau Rouge, especially with the Sin R1 GT4. The car is very good while driving uphill, so we I believe we can win time there. And I think we can have a good weekend if we solve the small problems with over steer.”

The Competition102 European Series will be live broadcast on www.gt4series.com/live and the official iPhone app. Track action starts on Saturday, June 20 and ends with both races on Sunday, June 21.