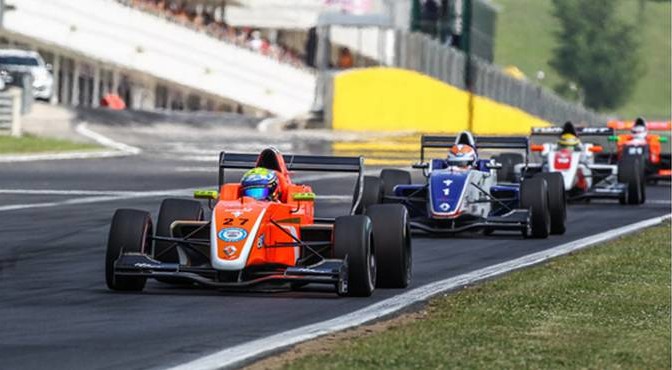 AVF cruised to two wins in the third round of the 2015 Eurocup Formula Renault 2.0 held at the Hungaroring venue near Budapest. Harrison Scott prevailed in the rookie standings in both Race 1 and Race 2 and also delivered a positive performance in the overall competition. On Sunday, Scott ended the group qualifying in third place before scoring a brilliant 5th place overall. The Spanish squad, managed by Adrián Vallés, emerged the third best team in the game.
Qualifying 2 was tough for Charlie Eastwood, who was at his second run with the team after his debut at Spa-Francorchamps. The Irishman was stopped by an electronic issue after just one lap, but recovered well up to the middle of the pack during the race. He eventually took 15th place and was the fourth best rookie of the day.

Harrison Scott (#27) Race 1: P7 +12”756 – Race 2: P5 +12”307
“I’m really happy for how this weekend unfolded. Taking two rookie wins and being fifth overall right behind the stars of this series is a great reward, not only for me, but for the whole team who did a really good job. We also made it back to the points after Alcaniz, and that makes us even more satisfied”.

Charlie Eastwood (#28) Race 1: P16 +31”738 – Race 2: P15 +27”708
“After making my debut with the team at Spa-Francorchamps, this has been a bit of a more… normal weekend. On Saturday, I tried to overtake as many opponents as possible after a good qualifying session in seventh, but passing is always hard in Hungary. In Race 2 though, after starting from the back of the pack due to a technical issue, I managed to recover up to the half of the pack, and I’m determined to make even more progress”.
The next round for the Eurocup Formula Renault 2.0 is scheduled for the 6th of September at Silverstone.